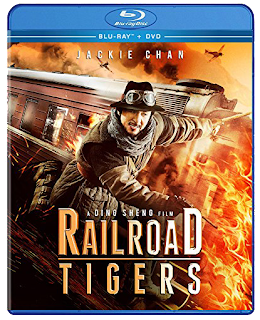 CLICK HERE FOR A CHANCE TO WIN A BLU-RAY COPY OF THIS FILM.

I suppose if any actor deserves to take a few victory laps, it's Jackie Chan. He's obviously slowed down a step or two, but that's okay. He's got nothing left to prove. Besides, as he demonstrates in Railroad Tigers, there's still some juice left in the tank. And if he wants to return to the type of freewheeling Chinese action comedies that first made him a star, is that such a bad thing? At the very least, we're spared another reteaming with Chris Tucker.

Chan does team up with a pretty talented cast (including his own son, Jaycee) to play a tight-knit band of scruffy freedom fighters (affectionately known as the Railroad Tigers) who rob Japanese army trains during World War II. After the Chinese army fails to blow up a nearby bridge - which would cut off the Japanese supply line - they decide to attempt it themselves by hijacking a train and using its cache of explosives. In addition to doing it for their country, Ma Yuan (Chan) sees this as an opportunity to avenge the death of his wife.

A potential suicide mission is sort of an odd premise for an action-comedy, sometimes shifting uncomfortably between slapstick comedy to brutal violence (though the latter is seldom too graphic). At 124 minutes, the film is also too long. The first hour or so is pretty meandering, and while most of these characters are affable and charming (even the villains have their amusing moments), one might grow impatient for the film to get down to business, which it eventually does...pretty spectacularly. The climactic train siege, gunfight & point-blank tank battle is rousing, suspenseful, phenomenally destructive and, yes, frequently funny.

Railroad Tigers won't go down as one of Jackie Chan's classics, though it's a nice comeback from his recent "serious" period, not-to-mention a definite improvement over the Hollywood hackfests he's appeared in lately. His glory years may be behind him, but this film is a good reminder of why we took him into our hearts in the first place.