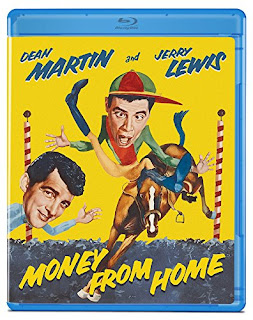 When we were kids, my little sister used to love watching old movies from the 50s & 60s whenever they aired on Channel 12, Portland's local station. Her favorites were comedies and musicals, so there was always a soft spot in her heart for those featuring Dean Martin & Jerry Lewis, which were often a combination of both. As someone just discovering movie monsters and rock music, I couldn't stand these movies.

Decades later, I've developed an even bigger affection for classic movies than my sister ever did. However, I've still can't sit through a Jerry Lewis movie without having a seizure. Like Adam Sandler today, 90 minutes of Lewis' constant screeching & mugging is just too much to take. It's like scorching your throat with shot after shot of straight vodka rather than mixing it with some orange juice so it goes down smoother.

Dean Martin is the orange juice that makes the movies they did together far more enjoyable than Lewis' star vehicles. None of them are masterpieces, nor is Martin himself a great actor, but his laid-back persona renders films like Money from Home at-least watchable.

Money from Home was their first color film together and the only one originally shown in 3-D (though there's no discernible use of the then-fledgling gimmick). Martin plays, "Honeytalk" Nelson, a down-on-his-luck gambler indebted to a local gangster and forced to fix an upcoming horse race. Lewis is Virgil, Nelson's animal-loving cousin who's duped into helping make certain the horse that's favored to win is unable to compete. But the job is complicated when Nelson falls in love with the horse's owner, while Virgil becomes smitten by a veterinarian.

Of course, like all their other films together, the plot is perfunctory. Martin croons a few tunes while wooing Marjie Miller. Lewis is given ample opportunities to display his brand of buffoonery. Fans may beg to differ, but since he's not the whole show here, his schtick isn't quite as grating as it would be when calling all the shots in his future films. Besides, Martin demonstrates he's capable of being slyly amusing himself, something people tend to forget when these two team up. Revisiting this film, I was constantly reminded how important (and unappreciated) Martin was to their creative success. As for this film, I also have to admit that gangster Jumbo Schneider and his crew of thugs are pretty damned funny, too.

Though certainly far from a classic, Money from Home is a silly and affable nostalgia trip for people like my sister, who grew up on this stuff. That it's available on Blu-Ray for the first time will be of keen interest to them.