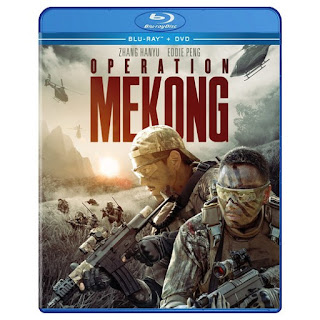 If you ever wanted to watch a coked-up child play Russian Roulette and lose, have I got a movie for you...

Supposedly inspired on real events - though you'll scarcely believe a minute of it - Operation Mekong is a Chinese action film loaded with bombastic, bloody mayhem. Gao Gang (Zhang Hanyu) and Fang Xinwu (Eddie Peng) are two drug enforcement agents who go undercover with a team of mercenaries to try and stop the flow of drugs from the Golden Triangle, a region along the Mekong River where powerful cartels control everything and everyone.

The most vicious & chemically imbalanced of the drug-lords is Naw Kham (Pawalit Mongokolpisit, sporting the mother of all mullets), who essentially declares war on the Chinese police. In addition to surrounding himself with a legion of murderous thugs, scores of kidnapped drug-addicted kids (little kids) live with him. He keeps them busy, though...walking into police stations with bombs and protecting his compound with machine guns. Father of the year, he ain't.

Character development - and a majority of the plot, for that matter - mostly takes a backseat to explosive action and brutal violence. Some of the latter is truly unnerving, such as the aforementioned Russian Roulette scene and the fate of an innocent woman at the wrong end of a knife, though none of it's particularly exploitative. As for the action...Dante Lam directs like a graduate from the Michael Bay Academy, which isn't quite as terrible as the comparison implies. Sometimes big & ballsy is the way to go, and when your movie already stretches credibility to the breaking point, why not toss in a shoot-out/car chase that destroys an entire shopping mall?

Operation Mekong seldom slows down long enough for the viewer to think too much about its plausibility. The violence involving children is a little tough to take - and not real really necessary - but other than that, the film is fairly enjoyable way to kill a few hours.