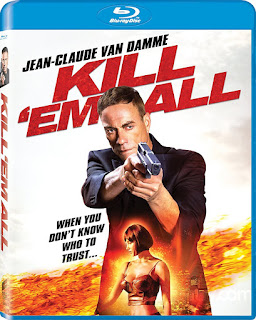 It wouldn't kill Jean-Claude Van Damme to just say no every now and then. In the past, with the right directors (like John Woo or Peter Hyams), he's actually cranked out a few decent movies. In recent years, he's even demonstrated a willingness to poke fun at his own image, with amusing results, in movies and TV shows on numerous occasions. Unfortunately, Van Damme still falls in with the wrong crowd way too often.

The wrong crowd this time are those responsible for Kill 'Em All, a low-wattage action fest thrown together by folks who've obviously seen Die Hard and The Usual Suspects too many times. In fact, if I were Bryan Singer & Christopher McQuarrie, I'd consider suing.

Van Damme is Phillip, a revenge-minded assassin who's brought to a hospital with serious injuries, as is his quarry, a Yugoslavian crimelord. The man's gang of thugs - each given a flashy intro - arrive to kill Phillip. Rather than try and escape, Phillip stays to finish the job and kill everybody one-by-one, with the reluctant help of Suzanne (Autumn Reeser), a plucky nurse with a convenient set of deadly skills of her own.

This is all told in flashback by Suzanne, being grilled by two of the most useless CIA agents in movie history (Peter Stormare & Maria Conchita Alonso, both of whom are surprisingly terrible). They appear to serve no real purpose other than to threaten Suzanne and provide most of the plot & character exposition. In several instances, the viewer might even be prompted to ask, "If you already know so goddamn much, why the hell are you treating this hapless nurse like a war criminal?" The film eventually explains everything - sort of - but it actually renders the previous 90 minutes more pointless and nonsensical.

It's a premise and twist lifted straight out of The Usual Suspects, with none of Singer and McQuarrie's skill, kind of like hearing Beethoven 9th symphony performed by a middle school band class. None of the characters are remotely interesting either...the bad guys all smirk, sneer and show no fear, even when getting the shit kicked out of them. Van Damme himself does a decent job, though not required to do more than look haggard and crack limbs. While it's reassuring to see he can still deliver a hearty roundhouse kick, he really doesn't look very healthy. Sure, no one stays young forever, but even without the cuts and contusions, he's starting to resemble Eddie on all those Iron Maiden album covers.

Jean-Claude Van Damme has cranked-out so many cheap, budget-bin fight-fests since his heyday that I can't imagine Kill 'Em All appealing to anyone but his staunchest fans. It's just another generic, derivative and depressing hodge-podge of ideas ripped-off from better films. I'm sure Van Damme appreciates the paycheck, but he needs to go back to hanging out with a better crowd before he ends up on Dancing with the Stars or an A&E reality show.

BLEH...LIKE COUGHING UP A HAIRBALL
Posted by D.M. Anderson at 3:04 PM