DVD Review: LAND OF MINE 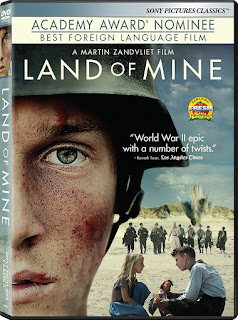 The Nazis weren't the only ones committing atrocities in World War II.

Once the war ended, the Danish army forced thousands of captured German soldiers to clear its beaches of over two million land mines. Most of them were inexperienced kids and nearly half were killed. Land of Mine presents a part of Danish history few people are probably aware of.

Roland Moller plays Sgt. Rasmussen, who, like most Danes, still harbors an understandable amount of resentment and hatred for the Germans. He's placed in charge of 14 boys, who must clear a section of beach where 45,000 landmines are buried, which he estimates will take three months, providing each boy finds and defuses six-an-hour. Once their task is completed, they will be permitted to go home.

With precious little prior training, every day is a living a nightmare. The knowledge that any of them could die without warning takes a psychological toll on the soldiers, not helped by Rasmussen's callous treatment. It's days before he even feeds them for the first time and he's indifferent when a few become seriously ill. But after one of them is blown up (whose death is agonizingly slow) and he sees how it affects the rest of them, Moller has an epiphany, reminded that his 'enemies' are just homesick kids who had their own families, hopes and dreams before the war, and now just want to return to put their lives back together.

Other than Sebastian (Louis Hofmann) and two ill-fated twins, we don't know much about these soldiers. This is mostly Rasmussen's story and his evolution from vindictiveness to empathy, becoming almost a father figure in the process. The performances are mostly low-key and convincing, Moller in particular, who conveys his character's change with subtlety and skill.

Despite the deliberate pace and consistently solemn tone, Land of Mine is often a harrowing, tension-filled experience. Watching these kids attempt to defuse the mines without being blown to bits is almost unbearably nerve-racking, made all the more intense due to the relative quiet permeating the surrounding scenes.

Nominated for Best Foreign Language Film at the 2017 Oscars, Land of Mine is a somber, eye-opening film. Like the previous year's winner, Son of Saul, the subject matter isn't something most would want to revisit, but it's definitely worth an evening of your time.
EXTRA KIBBLES
"In Conversation with Director Martin Zandvliet" - A Q&A session following a screening.
KITTY CONSENSUS:

VERY WELL MADE, BUT NOT EXACTLY A FEEL-GOOD FILM
Posted by D.M. Anderson at 7:06 PM