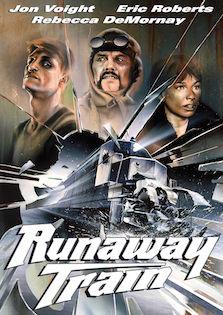 Tearing up the tracks at 100 miles-per-hour, Runaway Train features hair-raising footage and spectacular Oscar-nominated performances by Jon Voight (Coming Home, Deliverance) and Eric Roberts (Star 80, The Pope of Greenwich Village). Manny (Voight) is the toughest convict in a remote Alaskan prison who, along with fellow inmate Buck (Roberts), makes a daring breakout. Hopping a freight train, they head full steam for freedom, but when the engineer dies of a heart attack, they find themselves trapped, alone and speeding towards certain disaster. Until, that is, they discover a third passenger, beautiful railroad worker, Sara (Rebecca De Mornay, Risky Business, The Hand That Rocks the Cradle), who's just as desperate and just as determined to survive as they are. Beautifully shot by Alan Hume (For Your Eyes Only), with top-notch direction by Andrei Konchalovsky (Siberiade, Tango & Cash) and based on a screenplay by Akira Kurosawa (The Seven Samurai). Co-starring John P. Ryan (Cops and Robbers, Avenging Force) and Kenneth McMillan (True Confessions, Ragtime). COMING JUNE 13 FROM KINO LORBER 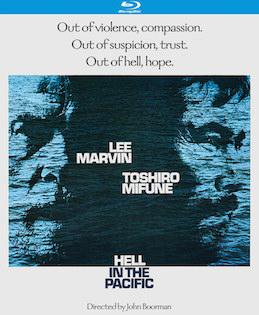 From John Boorman, the director of Deliverance and The Emerald Forest comes this gripping adventure about two wartime enemies trapped alone on a deserted island. Screen legends Lee Marvin (Prime Cut, Monte Walsh, The Dirty Dozen) and Toshiro Mifune (Yojimbo, The Challenge) deliver striking and well-etched performances in this searing psychological drama that packs plenty of action and excitement. From the instant they meet, a marooned American soldier (Marvin) and his Japanese counterpart (Mifune) have the same objective: to kill each other. But it soon becomes apparent that the only way they will survive is by forging an uneasy truce and cooperating with each other. Can they rise above the hatred that divides them long enough to stay alive? Two of the film's best features are the terrific color photography by the great Conrad Hall (In Cold Blood) and original musical score by the legendary Lalo Schifrin (Bullitt). COMING JUNE 27 FROM KINO LORBER