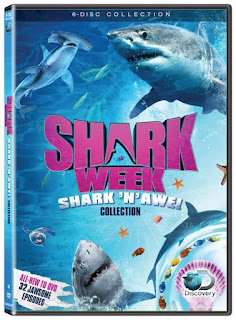 Shark Week remains the only time of year the once-great Discovery Channel is worth watching. Though the "science" of some of the recent documentaries are occasionally dubious (The Monster Shark Lives, anyone?), who doesn't love watching these creatures in their natural habitat (and the men & women who enjoy taunting them)?

Many episodes and collections have popped up on DVD before, but content-wise, Shark n' Awe is the mother of all of them, 32 episodes on six discs. Now any week can be Shark Week, and freedom from commercial interruption really is the best way to watch these docs, especially since nearly every scheduled break is an obnoxious cliffhanger.

There are a lot of good episodes, including another in their ever-popular "Air Jaws" series and a second go-round by the Mythbusters gang to test the plausibility of the scuba tank explosion in Jaws. I could have done without the three "Sharksanity" episodes, which are simply collections of 'best-of' moments from previous shows (some of which appear in this same set). On the other hand, we're spared most of Discovery's lousy psuedo-documentaries claiming megalodons still exist.

Best of all, the whole thing is priced at just under twenty bucks (and available exclusively at Walmart). Even with no bonus features, how can you go wrong with a DVD set like this? For shark lovers, this is a great binge-a-thon. 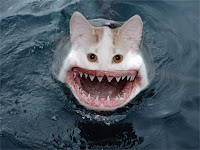 PURR-R-R...LIKE A GOOD SCRATCH BEHIND THE EARS
Posted by D.M. Anderson at 1:59 PM