Blu-Ray Review: THE SPACE BETWEEN US 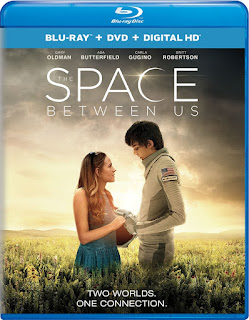 With the prospect of going to Mars being a trendy topic of late, the basic premise of The Space Between Us is quite intriguing. Too bad it eventually shoots itself in the foot by aiming for a different audience than it probably should have. I sort of knew that going in, but was still somewhat disappointed to see the whole thing playing out exactly as I suspected.

It begins with the mother of all implausibilities, that NASA would somehow remain completely unaware that one of the astronauts they just sent into space to colonize Mars is pregnant. Considering every astronauts' health is under constant meticulous scrutiny from the moment they're scheduled to fly, that's an enormous pill to swallow.

But there's nothing wrong with suspending a bit of disbelief for the sake of a good story. The child ends up being born on Mars. Because of the effects of Mars' lighter gravity on his bones and organs, he would be unable to survive on Earth. After his mother dies during childbirth, he's more-or-less raised by Kandra (Carla Gugino), one of the other colonists. Flash-forward sixteen years, and Gardner (Asa Butterfield) is a restless teenager who is internet pals with Kendra (Britt Robertson), a cynical foster child from Colorado (Wi-Fi technology apparently increases about a billion-fold in the near future).

Then NASA develops a surgical method to strengthen his frame that allows him to come back, much to the chagrin of Shepherd (Gary Oldman), the scientist who planned the original mission. He fears the long-term effects of Earth's environment on Gardner's health. Sure enough, staying for any prolonged period could be fatal. Gardner doesn't want to return to Mars, however, so he escapes NASA's medical facility and heads out on a cross country journey to find Kendra.

Up until now, The Space Between Us is an interesting - albeit far-fetched - sci-fi tale of a young man discovering the wonders of Earth for the first time. Then it's as if someone suddenly decided they needed to appeal to the young adult crowd (and the movie was marketed as such). The second half turns into a sappy love story straight out of a Nicholas Sparks novel. Kendra and Gardner become two star-crossed young lovers on the run, boosting cars along the way in an effort to find Gardner's father while outsmarting Shepherd and the authorities.

The performances are good (especially Oldman, who gives more of himself than the role really requires) and Gardner is certainly a charming, likable character. I'll even concede that the film, despite repeatedly pushing the envelope of believability, is certainly watchable, especially if you're part of the teen demographic it's geared at. It's just a damn shame that what starts off as something akin to The Martian ultimately ends up as A Walk to Remember.