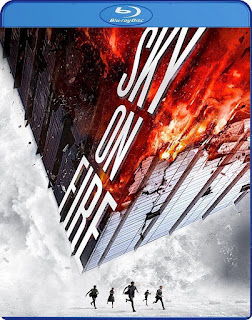 Sky on Fire has a lot going for it. There's action o' plenty...hand-to-hand combat, car chases, gunplay and, for good measure, one absolutely epic scene of destruction. It's confidently directed by Ringo Lam, whose City on Fire (no relation) remains an all-time classic of Asian action cinema. Daniel Wu (Into the Badlands) makes a solid action hero. And on a more superficial note, check out that badass box art.

Unfortunately, the story is convoluted, cliched and loaded with glaring lapses in logic. In a nutshell, everybody is after a batch of Ex Stem Cells, which can apparently cure any disease, including cancer. Years before, it was stolen by Tang (FanKuang Yao), who killed a colleague, Professor Lee, to get it. Fast-forward to today, and Tang runs a research facility known as Sky One (a massive skyscraper dwarfing every other building in Hong Kong). Lee's former co-workers, including his son, steal the stem cells back, which are then stolen from them by Jia, who wants it to cure his cancer-ridden sister. Sky One's head of security, Tingbo (Wu), goes after them, but switches sides due to Tang's greed and cruelty.

A lot of this is really confusing, especially at the beginning, not helped by plot turns that make little sense. For example, a team hijacks a truck leaving Sky One, then heads right back to the same building, for no discernible reason other than to feature more mayhem. It's also unclear why billionaire Tang would refuse to treat Jia's ailing sister in the first place, except to remind the us what a bastard he is. Speaking of the sister, even though time is rapidly running out for her to get the Stem Cell treatment, her new friends - well aware of her condition - decide to take her boating.

The viewer is better off forgetting the plot and simply enjoying Sky on Fire for the action and violence, which is elaborate and over-the-top, especially during the CG-laden climax. There's just enough mayhem to make it worth slogging through the sorry story and dumb characters.