Blu-Ray Review (by my cat): A DOG'S PURPOSE 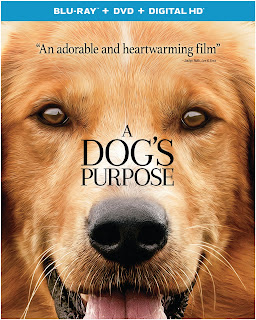 Reviewed by STINKY (pictured below)*

A Dog's Purpose? Isn't that an oxymoron? Anyone of reasonable intelligence can attest that dogs serve no actual purpose. But even though I've never been much of a science fiction fan, I'm an open minded enough to accept a dog as a protagonist.

I'll say this much: A Dog's Purpose starts off great, when a puppy gets snatched-up by dogcatchers, hauled to the pound and gets what's coming to him. Serves him right for having the audacity to be a dog. Even though one of the people I allow to share my sofa looked surprised and saddened, I briefly thought this was the greatest film of all time. Phenomenally short, maybe, but a rich viewing experience. Purring contently, I prepared to jump off the sofa to go partake in a few hours of much needed grooming. No need to sit through the end credits; I didn't care who played this stupid dog.

But the end credits didn't come. The movie wasn't over after all, and what could have been the greatest cinematic achievement of all time took a major turn for the worse. This dead dog comes back as another dog, still looking for his purpose, which he stupidly thinks is spending his life as some dumb kid's loyal companion. Really?

As a feline film critic, I'm willing to suspend disbelief for the sake of a story, so long as it doesn't insult my intelligence. But, come on, everyone knows only cats have nine lives; dogs are too inherently dumb to deserve more than one. For example, this pooch, named Bailey, runs into a burning house to rescue his boy. How stupid does an animal have to be to selflessly come to his master's aid when it's far safer to simply take off and find a new one? This idiotic animal even sticks around after the boy's dad becomes an abusive drunk.

On the plus side, Bailey dies, too, though I don't believe for a second the entire family would gather around to comfort him, then mourn his passing. These are the same people who unceremoniously buried their dead cat in the backyard without shedding a single tear, just so Bailey could dig her back up and bring her into the house for a cheap laugh. Ha-ha...very funny.

I shot a glance to my own person. He actually looked sad Bailey died. Geez, did he cry when the shark in Jaws exploded, too? While we're on the subject, why is it that when a dog dies in a movie, it's tragic, but when a cat does, it's exposition? Meh!

Anyway, this dog comes back again...and again...and again, still looking for his stupid purpose, always dying before he finds it. Talk about persistence. Judging from my person's face, these moments are supposed to be bittersweet, but for me, this was like watching Jason Voorhees repeatedly coming back in those Friday the 13th movies. I won't spoil the ending for you, but let's just say it's more far-fetched than Independence Day and as depressing as the climax of Seven. My person, however, actually had a smile on his face. Sick bastard.

Still, I concede I'm likely not the primary audience for a movie like this. As hard as it is to fathom, there's apparently lot of dumb people who actually love dogs. For them, A Dog's Purpose is probably a charming, sweet film, made more so by narration from some guy named Josh Gad, who voices Bailey's thoughts (though everyone knows if a dog could think in human language, the only word they'd be capable of is "duh"). As for you normal folks reading this, you're better off dusting off your old copy of Harry & Tonto.

*The views and opinions expressed by Stinky in this review do not necessarily reflect those of her owner. She's always been a grumpy little hairball who purred when Old Yeller died. While A Dog's Purpose is a bit too cloying for some tastes, dog lovers should enjoy it.

Enter our giveaway HERE to win a Blu-Ray copy of A DOG'S PURPOSE
Posted by D.M. Anderson at 9:31 PM