RETURN OF THE JEDI and the Summertime Slug 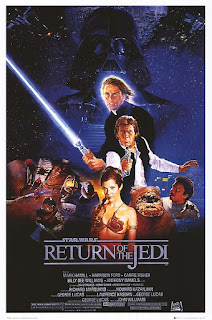 For better or worse, I'm a man of routine. I awake each morning to the incessant howling of our fat-ass cat, who acts like she hasn't been fed in days. Then it's coffee time, which keeps me from killing the cat, followed by my morning crap because coffee makes me poop (at which time I also check out the latest sports news on my iPad). Afterwards, I jump in the shower to smell like a flower. On weekends, however, I've incorporated Stinky Saturday as part of my routine because opening our monthly water bill is scarier than the shower scene in Psycho.

As a middle school teacher in the real world, Stinky Saturday often extends to Sunday, Monday and Tuesday during the summer months. By the time school’s about to start back up in the fall, I look and smell a lot like Grizzly Adams.

My chosen profession allows me a lot of free time during the summer, which my wife tries to counter with daily lists of chores to be completed when she's at work. Since it's obvious she's simply jealous of having to get up every morning while the kids and I snuggle our pillows for a few extra hours, I've learned incorporate her tasks into my summer routine as quickly and half-assed as possible. As long as they get done before she gets home, it's all good, leaving rest of the day for me to channel my inner Jabba the Hutt with a beer, the remote and various Frito-Lay products. If my sofa was equipped with a working toilet, I’d almost never leave it.

Though I may not be jet-setting around the world like some of my narcissistic Facebook friends posting selfies from the balcony of a Cancun hotel, I really love my summer routine. Aside from occasional excursions to the beach or the mall with my family, summer is my downtime, the chance to decompress and purge my educator persona to enjoy a few stress-free months just being me. Unhampered by a reasonable bedtime, the end of June is when I commence crashing on the couch into the wee hours of the night with boxed sets of Sergio Leone westerns, all three Godfather films and, of course, the original Star Wars trilogy.


I’ve seen all these movies so many times each that I practically know them by heart. While they never get old (well, maybe Godfather III), watch any film often enough and you’re bound to notice a few kinks in the armor...logistical plot holes, some cringe-worthy dialogue or a few complete lapses in plausibility. Star Wars’ Holy Trinity is especially guilty of all three. For example:
That’s just nit-picking, though. None of these observations have ever diminished my enjoyment of the Holy Trinity. Even though Return of the Jedi is arguably the laziest of the three, it’s loaded with classic, emotionally stirring moments. Luke Skywalker’s transformation from dumbass farmboy to Jedi master is complete, and if Darth Vader’s final, fatal act of redemption to save his son doesn’t move you, you must be soulless.

However, after recently re-watching Return of the Jedi yet again, I discovered one more awful truth. Not about the film this time, but myself...

We’ve all entertained thoughts of what we’d do if we possessed the same special powers as certain movie characters. If I were a Scanner, the road where I make my daily commute would run red with blood from the exploded heads of drivers who had them lodged up their ass. My time-hopping DeLorean would be a virtual cash machine as I took the ultimate road-trip with a decade’s worth of winning lottery numbers. As for self-absorbed fucknuts who believe the entire world comes to a complete halt whenever they receive a text...Hulk smash. If such evil thoughts sound like the work of someone who’d be easily seduced by the dark side of The Force, rest assured, I’d make an even worse Sith Lord.

For the most part, I’m fairly lazy and unambitious, especially during my summer routine.

Even those who've never seen Star Wars still probably know what The Force is, effectively summed up by Obi-Wan Kenobi in the first film: "The Force is what gives a Jedi his power. It's an energy field created by all living things. It surrounds us and penetrates us. It binds the galaxy together." That's an eloquent way of saying that those who learn to control The Force can do some kickass shit using only their minds. We see this progression with Luke Skywalker throughout the original Star Wars trilogy. The Force is strong in him, and through dedicated practice, mentoring from Obi-Wan and intense training from Yoda, he's become a powerful Jedi Master by the time he confronts the Emperor and Darth Vader at the end of Return of the Jedi.

But, man, that’s an awful lot of fucking work. Not only that, once you’ve become a master, you’re pretty much morally and ethically obligated to spend the rest of your life defending others without ever losing your cool (which happens to me almost daily during my morning commute). Since most Jedi appear to spend their days off meditating in secluded caves and mud huts without so much as a TV to pass the time, the pay must not be all that great either.

Though the Sith may have all the best toys, rule the galaxy with an iron fist and generally dress better, the job requires a lot more dedication than I could muster. While I’m not averse to the idea having power over millions, I shouldn’t have to work that hard to get it. But even if I suddenly woke up one day on the Emperor’s throne with all those terrible powers, I'm simply not that creatively ambitious. The most heinous deed I could probably conjure up would be giving everyone space wedgies for my own amusement.

I’m simply too set in my ways to use The Force for anything other than personal gain. Jedi or Sith, I’d likely quit my training once I learned to retrieve beers without leaving the sofa, convince the Domino’s driver my pizzas are free and use that same power of suggestion to spice up date night with my wife:

As for my daily list of summer chores...they'd all be done with the mystic wave a finger.

Over time, I’d probably end up as fat, green and gelatinous as Jabba the Hutt, so accustomed to tending all my needs with The Force that I’d barely be able to ooze off the couch. The primary job of my hired underlings would be to empty my waste bucket several times a day and wipe the fat-sweat from the folds in my skin (meaning every day would be Stinky Saturday). And yeah, I’d probably keep my wife on a leash in a brass bikini for those commercial breaks (actually, if I had it my way, she’d be hanging around the house in a brass bikini right now).


Which reminds me of a theory I recently came up with regarding Return of the Jedi. I generally don’t waste time paying attention to fan theories because I always had the impression most of them are dreamt up by guys who still wear Jedi jammies to bed, polish their pearlies with Darth Vader toothbrushes and include bowls of C-3POs as part of their nutritious breakfast. With way too much spare time on their hands, they share their theories on the internet with like-minded fanboys, who all virtual-high-five each other as though one of them just cracked an Enigma Code.

I wouldn’t call the following a fan theory, but it does sort-of make sense:

Perhaps Jabba the Hutt is strong with the force as well, but has gotten so used to relying on it that he’s become an epic tub of shit with T-Rex arms (which would make it tough to reach the remote, wouldn’t it?). Maybe he was once a Jedi in training before finally saying, fuck it, I’ve got all the power I need. It would explain why Luke’s Jedi mind tricks don’t work on him, and why his entourage continues to fearfully obey his every whim, even though they could easily gather together and roll Jabba's fat ass into the pit of Sarlacc.

At any rate, I’ve come to the sad realization that I would totally squander the awesome power of The Force. Not a noble Jedi or a malevolent Sith Lord...just Dave the Hutt, a lazy self-serving guy with no aspirations beyond making sure his annual summer routine requires zero physical effort.

While the house would always be spotless when my wife came home from work to strap on her brass bikini, Yoda would be gravely disappointed in this apprentice.
Posted by D.M. Anderson at 9:18 PM