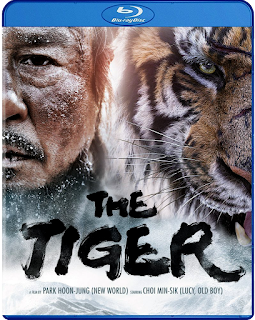 The Mountain Lord is one bad kitty, like a feline Charles Bronson and just as vengeful. Everyone discovers this the hard way after a band of hunters kill his mate and cubs. In addition to being a local legend in a nearby village near Mt. Jirisan, he's also the last living tiger in Korea. During the country's Japanese occupation in 1925, a power-mad commander, who collects animal pelts and trophies, has put a high price on the tiger's head.

Unfortunately for the poor saps hoping to collect the bounty, the Mountain Lord is swift, strong and smarter than the entire human cast. He's able to plan his attacks and slaughter entire squads of heavily-armed soldiers, not-to-mention making sure just the right people suffer the cruelest fates. The only guy who seems to understand the Mountain Lord is Chun Man-Duk (Choi Min-shik), a legend himself for his hunting skills, but has since retired after the death of his wife. He has damn good reasons for initially refusing to help anyone track down the Mountain Lord (revealed through eye-opening flashbacks), but not even his obnoxious teenage son, who'd love to kill the tiger because they really need the money, understands his reluctance.


For the most part, The Tiger is an exciting action-oriented tale of survival, revenge and redemption. It goes on a bit too long, has a lot of questionable CGI and often pushes the envelop of plausibility, but its agenda favors maintaining a somber, almost fable-like tone than hitting us with gritty realism. The performances (especially Min-shik's) are quite good and the film itself looks gorgeous, making the most of its snowy, wooded locations. The Tiger might occasionally remind some viewers of The Revenant, with its similar aesthetic, bleak tone and even a few plot developments. While not nearly as brutal, the film is still plenty violent.

And, like Charles Bronson, we're definitely rooting for the cat.