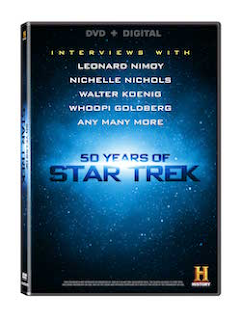 (August, 22, 2016) Celebrating five decades of the worldwide phenomenon, 50 Years of Star Trek, arrives on DVD (plus Digital) and Digital HD November 1 from Lionsgate. This feature-length special goes behind the scenes of the classic franchise with cast and crew interviews, rare archival footage, and the last full interview filmed with the unforgettable Leonard Nimoy, known for his treasured role as Spock. A must-see for fans of the TV shows, movies, books, and games alike, the 50 Years of Star Trek DVD will be available for the suggested retail price of $14.98.

OFFICIAL SYNOPSIS
America has been fascinated by Star Trek since it first aired in September 1966. 50 Years of Star Trek celebrates the franchise’s 50th anniversary through interviews with cast and crewmembers from every television series and original films.
Posted by D.M. Anderson at 9:22 AM