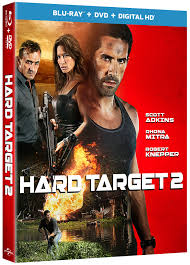 1993's Hard Target was a decent if unremarkable action movie (meaning it's Jean-Claude Van Damme's magnum opus). Even though it introduced American audiences to director John Woo's unique style, is it really such a fondly remembered brand name to inspire an in-name-only sequel 23 years later? To put that in perspective, only 19 years passed between the third and forth Indiana Jones films, and at least Spielberg and Ford came back for that one.

But here we are: Hard Target 2, without Woo or Van Damme (and his awesome mullet). The only connection to the original is its title. This could just as easily have been called Surviving the Game 2 (a similar-plotted 1994 film starring Ice-T), because this and countless other films have been liberally ripping off Richard Connell's story, "The Most Dangerous Game" for nearly a century.

For this go-around, we have Scott Adkins as Baylor, a disgraced and depressed former fighter who once beat his buddy to death in the ring. He now scratches out a meager living fighting in Asia. Then a wealthy sportsman, Aldrich (Robert Knepper), offers him a million dollars in rubies for one last contest. What Aldrich fails to mention is Baylor must escape through miles of jungle and reach the Thailand border while being hunted by several armed-to-the-teeth men (and one woman) who’ve paid Aldrich for the privilege. From here, the usual mayhem ensues...cat-the-mouse chases, gunplay, explosions, knife fights and hand-to-hand combat. And sorry, no special ribbon for correctly predicting who emerges on top.


Adkins is no Daniel Day Lewis, but you knew that already. Still, he flexes, grimaces and cracks bones as efficiently as Van Damme ever did. And kudos to Robert Knepper, who brings more to the table than the movie deserves with some amusing scenery chewing. As for Rhona Mitra, strapped in leather like Catwoman's evil twin, she has just one job: to look hot & sultry with a crossbow, which she does quite well.

Director Roel Reine is no stranger to budget-conscious, direct-to-video action sequels (The Marine 2, 12 Rounds 2, The Condemned 2, Death Race 2 & 3). Nor is Adkins, for that matter. But both are competent enough to make Hard Target 2 a fairly fun bit of fiery fluff. While utterly predictable at every turn, loaded with implausibilities and a few gaping plot holes, at least it isn’t boring.

EXTRA KIBBLES:
4 Making-of Featurettes: "A fighting Chance: Behind the Scenes"; "Into the Jungle: On Location"; "Through the Lens"; "Thrill of the Hunt" (these run about 5-10 minutes each)
Deleted Scenes
DVD & Digital Copies