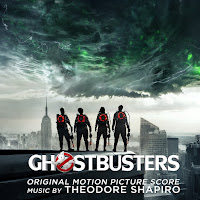 Unlike the frankly-amusing - and pointless - fanboy arguments debating Paul Feig's gender-swap reboot of Ghostbusters, the musical merits of Theodore Shapiro's score are actually worth discussing.

The original Ghostbusters was scored by the legendary Elmer Bernstein, whose music reflected the film's overall playful tone, even during the spectacular-for-the-time action and special effects sequences. Since Bernstein is no longer with us, Shapiro takes the reins for this one, a logical move since he's mostly associated for scoring comedies.

Ironically though, as an isolated piece of music, Shapiro's score is mostly dark and foreboding, complete with percussive crescendos and ominous choir sections. If the listener wasn't already aware this was the music for Ghostbusters, they could easily mistake it for something accompanying an sci-fi/fantasy film along the lines of Independence Day or the latest epic from Marvel Studios. In fact, it isn't until Track 11 that Shapiro begins interpolating some of the original's familiar themes to remind us this is still a Ghostbusters movie.

While there's nothing particularly memorable about the score (no new themes which get stuck in our heads) the music itself isn't bad and at least we're spared Fall Out Boy's godawful interpretation of Ray Parker Jr's classic theme song (which appears on an entirely different Ghostbusters soundtrack album containing various songs from the film).