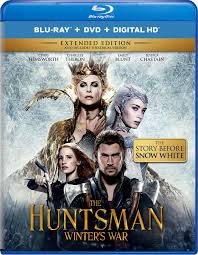 Snow White and the Huntsman may have been successful, but I've personally never met anyone who was blown away by it. As generic CGI-driven fantasy epics go, it was passable entertainment. One of it’s definite bright spots, though, was Charlize Theron’s scenery-chewing turn as Ravenna, Snow White’s wicked stepmother. She easily stole the entire film right from under Kristen Stewart’s nose. That probably wasn’t too difficult, since Stewart's only expression appears to be that of a snotty high schooler who's offended whenever anyone over 30 speaks to her.

Speaking of Stewart, other than a brief piece of archive footage, she’s nowhere to be found in The Huntsman: Winter’s War, a prequel/sequel that few were likely expecting or even asking for. Her absence is inconsequential, since this one borrows more from Hans Christian Andersen’s The Snow Queen than Snow White. Chris Hemsworth and Theron are back though, along with the welcome additions of Emily Blunt and Jessica Chastain in pivotal roles.

Blunt is Freya, the younger sister of newly-crowned Queen Ravenna. But unlike Ravenna, she does not yet possess any special powers, at least until rage over her murdered son unleashes her ability to turn anything into ice. Seven years later (and after the events in the first film), Freya is now The Ice Queen, stealing other people’s children to raise as warriors to strengthen her reign. Two of them, Eric and Sara (Hemsworth & Chastain), grow up to become her best fighters. They also make the mistake of falling in love, forbidden in Freya’s kingdom. Of course, they are discovered, and their punishment is worse than the time my parents once caught me with a girl in my room.


After seeing Sara die, Eric manages to escape. Meanwhile, Snow White’s magic mirror goes missing and her husband, King William, wants Eric to locate it. Sara, apparently not-so-dead after all, rescues Eric from Freya’s army, but she’s still pissed because she thinks Eric simply ran away. Later, Freya ends up with the mirror, and after asking the $64,000 question, Ravenna emerges from it, also not-so-dead. If fact, she now wants to use Freya to regain her rule over the kingdom.

The story lends itself to a few pretty decent action scenes, aided by serviceable CGI that might have been mind-blowing 15 years ago. Much like the first film, The Huntsman is mildly entertaining with some lulls during the second act. In the end, though, the performances render this an improvement over Snow White. Blunt, Chastain and, of course, Theron manage to rise above the familiar plot and hyperactive visuals to give their characters much-needed dramatic weight. Hemsworth delivers his usual workmanlike performance, just enough let us know we’re supposed to be rooting for him.

Considering Snow White and the Huntsman wasn’t exactly screaming for a sequel, The Huntsman: Winter’s War is a serviceable follow-up, and Theron’s clearly having fun revisiting her nasty side. It isn’t gonna make anyone forget The Lord of the Rings Trilogy (in fact, you might have trouble recalling much of this one within a few hours). But if you enjoyed the first, more of the same is a decent way to kill a dull evening.