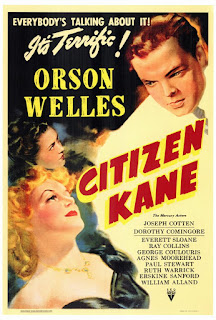 Anyone with a rudimentary knowledge of cinema (as opposed to someone who’s simply seen a lot of movies) has to give-it-up for Citizen Kane. The first and most enduring film by writer/director/actor/super-auteur Orson Welles, its influence, from both narrative and technical standpoints, cannot be understated. Movies as we know them today, whether directed by geniuses like Martin Scorsese or chest-thumping hacks like Michael Bay, wouldn’t exist without the foundations first committed to celluloid by Welles and his merry band of subversive Hollywood rebels. Even a cultural phenomenon like Star Wars doesn’t hold a candle to Citizen Kane in terms of its impact on how films are made. Nearly 80 years later, Kane is still regularly cited by historians, critics and legendary directors (living and dead) as the greatest film of all time.

Still, I fucking hate this movie.

I’ve seen Citizen Kane at least a half-dozen times over the years. The first was back in my mid 20s, when my cinematic enthusiasm (and arrogance) was extending beyond what typically played at the suburban multiplex. Mostly thanks to home video, I discovered Hollywood’s rich history and countless classic films of various genres. Many were groundbreaking and influential in their own right, and viewed within the context of the era when they were made, a lot of them are just as enjoyable as any modern blockbuster you’d care to name. Not only that, you can easily see how many modern marvels would never exist without these ancient chestnuts paving the way. George Lucas himself acknowledged Akira Kurosawa’s The Hidden Fortress as the primary inspiration for Star Wars. If you think Ridley Scott’s Alien was influential for its time, seek out the seldom-seen relic, It! The Terror from Beyond Space, made two decades earlier with the exact same plot.

But those examples are strictly related to standard story tropes. 1941’s Citizen Kane arguably drew the line drawn between Hollywood’s formative years and film as we know it today. The cinematography alone (extended takes, set lighting, deep focus, low angles, shots of actual ceilings) was a game changer, as was the overall flashback structure of the narrative, told from the points of view of multiple secondary characters (not all of whom were 100% reliable).

So I’d read and heard enough about the film that, if I truly wanted to expand my horizons, I was compelled to check it out. I think compelled is the right word, because Citizen Kane’s actual story (a thinly-veiled biography of newspaper mogul, William Randolph Hearst) held little personal interest. If the film were made today, it isn’t something I’d pay to see in a theater.


And indeed, watching it for the first time, I could appreciate the film’s technical wizardly, especially Gregg Tolland’s cinematography, which nearly gives Kane the look of a gothic horror film. Still, I checked my watch a lot, anxious to get this movie milestone out of the way so I could pat myself on the back for having seen it, much like when I once bought a Willie Dixon album because it seemed cool at the time to demonstrate I was hip to the traditional blues music that made rock & roll possible. But honestly, I’ve always hated blues (especially Chicago blues) and only dragged that album out when my musically-elitist friends were around to see me play it. So while I’m grateful that Dixon’s “You Need Love” made Led Zeppelin’s “Whole Lotta Love” possible, I’ll take Zep’s rip-off over his sludge any damn day of the week.

To anyone who’d listen, I championed Citizen Kane because I thought I was supposed to. While films such as Gone with the Wind and Casablanca may have represented Hollywood’s so-called Golden Age in the eyes of the masses, true cinephiles embraced Kane as the singular masterpiece which made modern filmmaking possible. But despite subjecting myself - and others - to this film numerous times over the years (ballyhooing its virtues every time), the truth is I’ve personally never actually enjoyed Citizen Kane. As played almost too perfectly by Orson Welles, Charles Foster Kane is a megalomaniacal, nepotistic douche whose narcissism makes Kanye West look like the poster boy for humility. The film itself is a slow, cold and dark depiction of how one man’s abuse of power alienates everyone around him, to the point where he dies alone with nobody left to mourn his passing. I’m not saying all movies should be sunshine and lollypops, but for a film to be this continually lauded, at least some actual entertainment value should be a considering factor.

But still, I buried my personal feelings about Citizen Kane and used it as a springboard to show off my cinema smarts. If it bored the shit out of any uncultured rube I ever showed it to, my snobbery told me they simply didn’t get it. With hindsight, I realize they actually did get it. They just simply didn’t enjoy it.

I’ve never enjoyed martinis, either, but tried like hell for awhile (likely because of James Bond movies). Martinis always looked like the cultured man’s drink...the epitome of class. The perfect martini consisted of just the right mix of vermouth or vodka, splashed over ice with a few plump, salty olives tossed in for good measure, all poured into a delicate glass and intended to be sipped by those individuals with impeccable palates who could tell the difference between a good martini and a bad one after a single taste. I think I was more in love with the idea of martinis as my drink of choice, because I’ve never had one that didn’t taste like Windex. I eventually had to concede that I hated them, and would rather pound a half-rack of Natty Ice than nurse a dry martini in the same amount of time.

I’m now at the age where I don’t really care what others think, including fellow cinephiles I used to worry about impressing. Life is short, and if I’m gonna waste time revisiting old movies (which is often), I’d rather sit through a kid being pancaked by a steamroller in Maximum Overdrive for the umpteenth time than endure Citizen Kane ever again. It’s enough to truly acknowledge Kane’s technical & narrative influence without declaring anything resembling love. If that means my license as a true blue cinephile is revoked, I’ll just have to live with it.
Posted by D.M. Anderson at 8:32 PM