DVD Review: THE LADY IN THE VAN 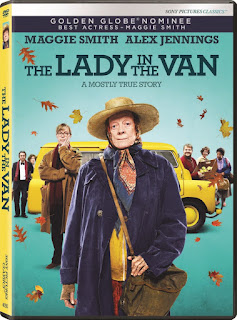 The Lady in the Van is based on writer Alan Bennett's popular play, which was inspired by his real-life experience of allowing a transient old woman, Mary Shepard, to park her van (which is also her home) in his driveway, where she ultimately ended up staying for 15 years. The concept has the makings of an amusing, bittersweet story of relationships. However, while the film is very well acted and sometimes charming, it isn't likely to be something that sticks with you too long after the credits roll.

It goes without saying that Maggie Smith as the title character (which she also performed in the original stage play) is the primary reason to check this out. She practically immerses herself into this role, sometimes to levels bordering on brave, and the audience can't help but be captivated. To a lesser extent, Alex Jennings is also terrific as Bennett in what amounts to a dual role...Bennett the writer and Bennett the generous neighbor, both which often share the screen at the same time.


As good as the lead performances are, these characters are placed in a story where not a whole lot happens. Sure, they learn to depend on each other in a strange, endearing way, and we eventually discover what led Shepard to her current situation, but the overall plot only moves along in minor fits and starts, counting on the performances to save the day, which they do to some extent. But persoanlly, I was expecting the film to be much funnier, with a more satisfying final act than what we actually get...as compensation for the many meandering moments.

Still, The Lady in the Van is certainly watchable, for Smith's performance if nothing else. It's not-so-much a journey as a leisurely-paced snapshot of two characters we don't mind hanging out with for awhile. But once they're gone, we probably won't give either a second thought.