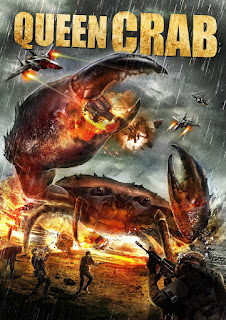 To be honest, Queen Crab had me from the moment the title creature arrives onscreen in all its stop-motion glory, harkening back to my childhood days in the 70s, when no-budget monster-fests used to fill-up the smaller screens of our local cineplex for a week or two. Ominous titles such The Giant Spider Invasion and The Crater Lake Monster were simply too enticing for an 12 year old to pass up. Of course, none of these films were as spectacular as the poster art suggested. For the most part, they looked like they were shot on weekends in the backwoods of the director's hometown, with a cast of amateur & has-been actors reacting in horror to hilariously-rendered creatures. As cheesy as they were, though, most were still a lot of fun.

Like all those dubious classics of a bygone era, Queen Crab is a title-tells-all creature feature about an oversized crustacean on the rampage after her offspring are unceremonious killed by some dumb locals in the town of Crabbe Creek (yuk, yuk). The dialogue & attempts at humor are generally groan-inducing and the performances are uniformly terrible. Still, there's an affable, nostalgic charm found here that you just don't get from the SyFy Channel's plethora of CGI-heavy cheapies. The special effects in Queen Crab may still be chuckleworthy, yet one has to appreciate the use of old-school stop-motion animation to depict the title creature (which is way too cute to actually scare anyone). Personally, it's been so long since I've seen a movie go the Harryhausen route, the effects alone kept things interesting and fun.

Queen Crab is not a great film, arguably not even a good one. But if you're of a certain age and fondly recall the days when you were duped by a killer poster or VHS box cover, you probably already know that. You still might find it enjoyable to be bamboozled yet again.