Blu-Ray Review: WHERE TO INVADE NEXT 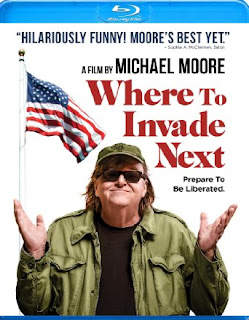 It goes without saying that Michael Moore's incendiary brand of documentary filmmaking is polarizing, to say the least. You are either totally down with his outspoken socio-political views or completely enraged by them. And he probably wouldn't have it any other way.

Love him or hate him, Moore's latest, Where to Invade Next, isn't likely sway your opinion. Like most of his other films, it is deliberately subjective, but Moore's never been a true documentarian in the purest sense, anyway. He has an agenda, wears it proudly on his sleeve and ventures out into the world to find evidence which supports it. Objectivity has never been part of his vocabulary.

In Where to Invade Next, Moore travels to several countries which appear to have the whole “American Dream” thing figured out better than we do, from employee benefits to the treatment of women to educating their children on even the darkest moments of their history. He compares other cultures’ views on recreational drug use to the United States’ misguided “War on Drugs” campaign that has waged for decades, creating some admittedly tenuous arguments that African-American slavery is still alive and well. While the film will undoubtedly create some ‘a-ha’ moments with some viewers, an equal number will just as likely call bullshit on Moore’s entire agenda.


But that’s neither here nor there. The biggest question is, like any other film, is Where to Invade Next interesting and entertaining? Yes...for awhile. Unlike his more inflammatory films, such as Bowling for Columbine or Fahrenheit 9/11, Moore keeps pounding his message home long after he’s laid his cards on the table and viewers have already gotten the point. This one could have been thirty minutes shorter without losing any of its intended impact.