Blu-Ray Review: THE NIGHT BEFORE 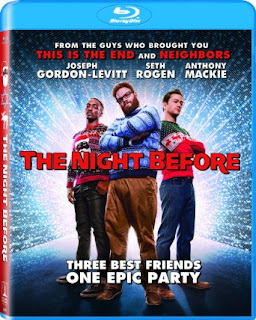 The Night Before is more or less what you’d expect from Seth Rogan and Evan Goldberg. The two have previously collaborated on such scatological stoner comedies as Superbad, Pineapple Express and This is the End. If you hold those films in high regard, now you have one to ring in the holidays.

Rogan, Anthony Mackie and Joseph Gordon-Levitt are Isaac, Chris and Ethan, three life-long friends who’ve made partying ’till they puke a Christmas Eve tradition, which started years before when Isaac and Chris were consoling Ethan after the sudden death of his parents. Now they’re getting older; Isaac’s first child is on the way, Chris is a pro athlete and Ethan is a struggling musician whose girlfriend, Diana (Lizzy Caplan), left him because of his fear of commitment. The three get together for one last Christmas Eve blow-out before moving on with their lives.

One thing that’s always eluded them each year was the legendary “Nutcracker Ball,” a Christmas party so big and wild that its location is only available to those with tickets. When Ethan happens upon three tickets (he steals them), they are off, but not before scoring weed (several times) from local dealer Mr. Green (Michael Shannon, who’s not only hilarious, but also a philosophical moral compass). The usual wild-night-gone-bad hijinks ensue, sometimes quite funny, other times not (Rogan’s ‘I-can’t-handle-my-high’ routine gets tiresome pretty quick).


As with previous Rogan/Goldberg collaborations, The Night Before is rambling, episodic and gratuitously raunchy (dick-pics, anyone?). I suspect it’s director Joseph Levine (50/50, Warm Bodies) who's responsible for giving the film some actual heart with surprisingly sentimental moments that makes us genuinely like these characters.

What this means is The Night Before is a mixed bag. It isn’t particularly original or clever, but it’s amusing enough to please those who consider Pineapple Express to be the Gone with the Wind of stoner movies. If you aren’t already onboard with this type of humor, The Night Before isn’t likely to change your mind