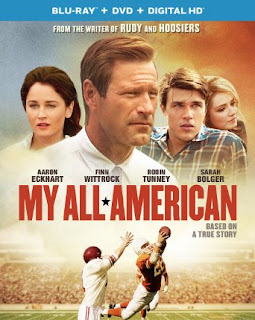 Ever pour yourself a bowl of Cheerios without dumping in a few teaspoons of sugar? Yeah, it’s edible - even good for you - but breakfast isn’t quite as enjoyable, is it? That’s what My All-American is like.

Since this is the directorial debut of Angelo Pizzo (screenwriter of Rudy & Hoosiers), one understandably expects yet-another inspirational triumph-of-the-underdog story. Hey, deal me in! I’ve always been a sucker for these things, and Pizzo has certainly proven in the past he knows how to push all the right buttons when it comes to sports-related true stories.

My All-American is based on the true story of Freddie Steinmark, an undersized Colorado football player who gets a scholarship to play under the tutelage of Coach Darrell Royal at the University of Texas. His brief but brilliant football is threatened when a malignant tumor is discovered in one of his legs.


But while the film is certainly earnest and watchable, it’s also curiously uninvolving. The performances are decent all around, yet none of the characters resonate much. We don’t really get to know any of them, including Steinmark, well enough to become emotionally invested. Not only that, despite a few early suggestions that his size was an issue, we’re never presented with a moment where Steinmark has to overcome any kind of physical obstacles. Until he’s diagnosed late in the film, he’s kicking ass on the gridiron from the get-go.

And there’s nothing wrong with that. As a period piece and sports film, My All-American is just fine. The numerous game scenes & montages are exciting, and Pizzo once-again demonstrates ample knowledge and respect for his subject. But it’s also intended to be a tear-jerker along the lines of Brian’s Song. In that respect, there simply isn’t enough sugar on the Cheerios to have us reaching for a tissue.

BONUS FEATURES:
2 Featurettes: "The Spirit of Freddie Steinmark"; "A Look Inside My All-American" (both are very similar and only a couple of minutes long)

NOT BAD, BUT NOT AS EMOTIONALLY INVOLVING AS IT SHOULD HAVE BEEN.