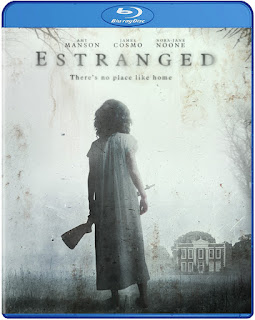 Though I personally didn't enjoy Estranged, I was compelled enough to see it through to the end, which I suppose can be seen as a positive.

January (Amy Mason) is a young woman recovering from a terrible accident which has left her a wheel-chair bound amnesiac, remembering nothing about her life before the crash. Her boyfriend, Callum, takes her to her family's home, a run-down old mansion in the woods, none of whom she's seen since acrimoniously taking-off six years ago. The reasons why are never made clear, but this family, led by malevolent patriarch Albert (James Cosmo), is a strange clan who appear happy she's home one minute, verbally & physically abusive her the next. After Callum disappears, she's trapped and forced to uncover her family's secrets (they aren't quite who they seem...duh) while simultaneously trying to escape from them.

Estranged is not quite the horror film we're led to assume from the Blu-Ray box art and summary, though it is plenty dark. In fact...the overall tone is really oppressive. While that isn't necessarily a bad thing, for a film which paces itself so deliberately, we're made almost immediately aware this family is a few cans short of a six-pack, and now just waiting for them to snap. When they finally do, all the efforts to create tension during the atmospheric first half is negated when the film descends into mild torture-porn, with January as the sole object of torment. We're simply marking the time after that, slogging through scene after scene of physical & psychological abuse.


The problem is most of the plot turns (not matter how lurid), aren't enough to counter the fact that Estranged is an unpleasant chore to endure. Even a film like Hostel, which is far more graphic, twisted and disturbing, manages to create a certain level of rousing fun for the audience. By the time Estranged reaches its final act, we're sick of its arty pretensions, scenes which go nowhere and ambiguity for its own sake. At this point, all we want is some kind of satisfying payback by January as a reward for the previous 85 minutes we've endured.

Still, Estranged was just manipulative enough that I just had to see how things turned out. While I personally found the film - and its ultimate denouement - to be an unsatisfying waste of 90 minutes I’d never get back, it’s just as easy to imagine other viewers extolling these very same shortcomings as virtues. As such, I’d advise one to proceed at their own risk.