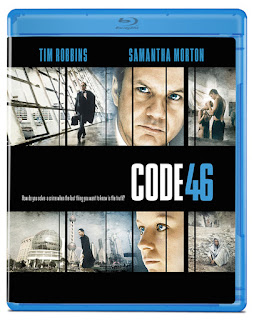 Another oddity rescued from obscurity by Olive Films, Code 46 is a stylish-but-slow piece of sci-fi noir which is more successful in creating a mood than an intriguing story.

In this dystopian future, genetic compatibility is mandatory for a man and woman to have a physical relationship (violation of this law is called a Code 46...you know, the number of chromosomes in our DNA). The borders of cities such as Shanghai are also designed to keep the undesirables out, who are forced to live in the surrounding deserts. Papers are required for travel and entry in to the city. William Geld (Tim Robbins) is a government investigator trying to find who’s forging such papers. Since he’s ‘infected’ with something called the Empathy Virus, he’s quickly able to discover a young woman, Maria (Samantha Morton), is behind it all. However, William ends up falling in love with her and doesn’t turn her in. Later, her mind is erased, but he’s able to rekindle their relationship soon afterwards, even after he learns the somewhat shocking reason why they are genetically incompatible.


On the surface, Code 46 appears to have something important to say about genetic manipulation and its societal ramifications. But ultimately, it’s essentially a doomed love story which will either suck you in right away or bore you to death, depending on your expectations. The film is visually arresting, using some exotic locales rather than special effects to depict this world. Overall, the performances are good (especially Morton), even though few of these characters are particularly interesting. Code 46 might also be a bit too deliberately-paced for its own good, leaving less patient viewers with the impression the same story could have been more effectively told in half the time.

The film doesn’t really dive too deep into the provocative ideas suggested by its premise. But strictly as a mood piece, Code 46 sort of works. It’s pleasant to look at and the music, while not your typical sci-fi score, somehow fits perfectly. This may or may not be considered praise, but it’s the perfect movie to unwind and fall asleep to.

NOT BAD...LIKE CAT CHOW (or catnip)