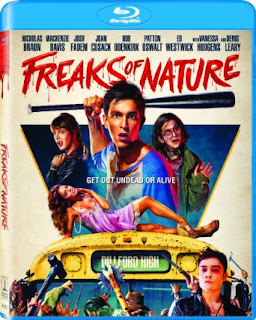 Sometimes patience is a virtue...

Freaks of Nature is the kind of horror comedy we've been getting a lot of lately: an outrageous premise, self-aware humor, over-the-top performances, cartoon-level gore and, of course, zombies. But not just zombies...vampires, werewolves and aliens are also thrown into the mix for a movie mash-up where we're certain screenwriter Oren Uziel gave himself a big, congratulatory attaboy for his own cleverness.

Indeed, during the first act, Freaks of Nature seems extremely impressed with itself. The premise - a small town where humans, vampires & zombies have managed to peacefully co-exist before aliens suddenly show up - is introduced in the prologue before flashing back to earlier that day. This is where we meet all the characters, mostly high school kids you’ve seen before: the insecure nerd, the dumb jock, the hunky stud, the high school slut, etc. A majority of the adult roles are filled out by the likes of Denis Leary, Joan Cusack, Keegan-Michael Key and Bob Odenkirk, but are little more than glorified cameos.

The first 30 minutes are terrible, more like a series of unfunny sketches created to showcase the comedic ‘names’ in the cast. From the dialogue to the performances, everything simply smacks of ‘look how goofy & outrageous this is!’ All those involved on both sides of the camera appear to be trying way too hard to make this film an instant cult classic.

But believe it or not, it gets better.


Once it dispenses with all the heavy-handed schtick, focusing on the story and three main characters, Freaks of Nature’s whacked-out premise actually becomes interesting, even funny at times, with several clever ideas and plot developments (like the notion that zombies regain more humanity & intelligence when they refrain from eating brains). Despite our first impression, we even start to like some of these characters enough to care about their fates once the fight against the aliens begins. And though it occasionally threatens to descend into pure parody, Freaks of Nature never quite crosses that line, which is a good thing. We've got enough of those anyway.

Ultimately, Freaks of Nature is worth checking out for fans of this kind of stuff. All you gotta do is suck-it-up and endure the blatantly-pandering first act. If you’re able to do that, you might find some of its rewards are worth the effort.