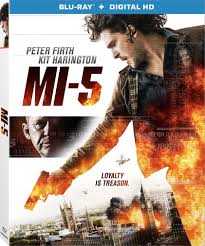 Spooks was a television series about a British counter-terrorist organization (MI-5) which ran for about ten years on BBC, so despite the derivative box cover art, this is not a Mission: Impossible rip-off. I’ve never seen the series, but if this theatrical film is any indication, the concept and execution is more like 24, only without any characters as intensely compelling as Jack Bauer.

At the start of the film, the MI-5 is headed by Harry Pearce (Peter Firth, reprising his role from the series), but when apprehended terrorist Adem Qasim (Elyes Gabel) manages to escape custody, Pearce is disgraced and turns renegade in order to, not only catch Qasim before he carries out a terror attack on London, but uncover a traitor inside MI-5 who made the escape possible. Meanwhile, recently discharged agent Will Holloway (Kit Harington) is recruited to find Pearce and bring him back. Though Holloway respects Pearce, he doesn’t particularly like or trust him, especially since Pearce was responsible for his discharge.

MI-5 is reasonably entertaining, with an intricate plot (though not difficult to follow), some interesting characters and a few well-executed action sequences (the airport chase in particular). Storywise, prior knowledge of Spooks isn’t a prerequisite, though I think Pearce’s actions (both good and bad) would mean more to those already familiar with the character. Harington is biggest name of those new To the cast and does a serviceable job in his role. One also gets the impression his inclusion is an attempt to establish MI-5 as a theatrical franchise with Halloway as its own Jack Bauer.


That said, MI-5 works fairly well as a stand-alone story, though nothing especially memorable (the film never quite escapes its TV origins). There’s also a nifty, vengeful twist in the final scene which provides a healthy dramatic punch. The scene also suggests, if MI-5 does indeed become a born-again franchise, it’ll be business as usual.