DVD Review: THE SPOILS OF BABYLON 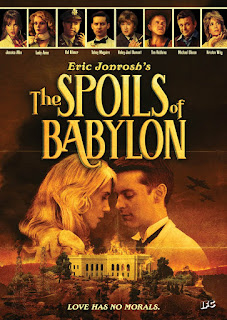 It helps if you are at-all familiar with what The Spoils of Babylon is spoofing, namely all the epic miniseries which proliferated network television in the 70s and 80s. Most were based on literary junk food written by the likes of Irwin Shaw, Harold Robbins and Colleen McCullough, and just as forgettable.

It also helps if you have an appreciation for Funny Or Die’s off-kilter brand of humor, especially since this IFC miniseries isn’t simply a direct parody either. While it’s definitely silly, the gags range from extraordinarily subtle to heavy-handed slapstick. You really have to be in the right frame of mind for this.

That said, The Spoils of Babylon is a mixed bag, often chuckle-worthy, seldom laugh-out-loud hilarious. Will Ferrell plays Eric Jonrosh, the pretentious author of the original novel who introduces each episode with all the pomposity and self-importance he can muster. Regarding the actual story, it’s a six episode tale of the decades-long rise and fall of the Morehouse family’s oil empire, as told by adopted son Devon (Tobey Maguire). Many of the usual mini-series tropes are skewered. Some scenes are quite clever, while others play more like those Saturday Night Live sketches that go on far too long.


The cast seems to be having a good time, though. Kristen Wiig is terrific as Cynthia, Devon’s sister/love interest. She over-emotes tremendously, on purpose, like a bad TV actress taking her role too seriously. On the other hand, Haley Joel Osment overacts in the worst way, as in,“Look at me chew the scenery! Isn't it funny?” As for Ferrell’s opening and closing segments for each episode...well, it’s typical Will Ferrell, meaning he's initially funny and spot-on, then takes just one step too far into shtick. The show’s budget-minded production values (and intentionally bad editing) are also amusing, though not really reflective of any miniseries made back then. The obvious tiny models seem to exist for their own sake, but are admittedly fun.

Despite its spottiness, The Spoils of Babylon never quite wears out its welcome. While seldom totally hilarious, it's a congenially goofy good time and arguably more effective when seen all in one sitting (a little over two hours) than in weekly installments on IFC (when a single episode would compel few to return the following week).