DVD Review: THIS CHANGES EVERYTHING 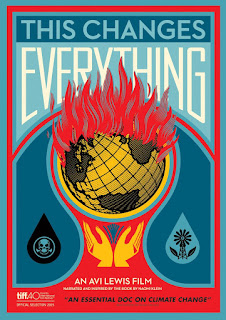 Like a lot of folks, climate change worries me. Personally, I think the evidence is overwhelming and fear we're leaving our children & grandchildren a world they won't be able to fix. There's an equal number who believe climate change is a myth or hoax perpetuated by a batch of scientific Chicken Littles looking for attention. While I hope and pray all the deniers are right, it shocks me how many are willing to roll the dice and do nothing about it. One would think some kind of action would be prudent in case of the off-chance they're wrong.

Yet I don't really do anything about it either. Sure, I recycle, but only because the city forces me to. I drive a gas-guzzling SUV and continue to buy products that I know are bad for the environment simply because they're cheaper or more convenient. While I verbally support those calling attention to humanity's short-sightedness regarding our planet, I've never felt compelled to join the crusade, unlike those featured in This Changes Everything.

This is a documentary based on Naomi Klein's bestselling book, featuring groups of people from various parts of the world taking on powerful governments and corporations in an effort to instigate change in regions where the land and water are being adversely affected by progress & commerce. As narrated by Klein herself, these are noble causes, to be sure, and the film does an admirable job focusing more on the awareness they're creating than dishing out dire apocalyptic warnings. In other words, this is not a rehash of Al Gore's An Inconvenient Truth.


But regardless of your position in the climate change debate, you have to admit An Inconvenient Truth was a captivating film. Whether it shocked you, reinforced your beliefs or had you screaming bullshit, its sheer audacity rendered it a memorable experience. While This Changes Everything is an obvious labor of love by everyone involved (including a list of well known celebrities serving as producers), as viewers, we aren't as emotionally invested in what's at stake (and we should be!). We admire these activists for what they're trying to accomplish, yet even though we see numerous scenes of them rallying against the system, we're ultimately never shown whether or not their efforts actually did any good. For a film which tries to be a call-to-arms regarding our impact on the environment, it simply isn't incendiary enough to resonate with the average viewer.

Ultimately, This Changes Everything has its heart in the right place and the subject matter couldn’t be more timely. It’s easy to admire the filmmakers’ intentions by calling attention to the struggles of activist groups squaring off against the system. However, as a viewing experience, it’s the kind of movie where you walk away feeling better about yourself for giving it your attention, but won’t likely linger too much afterwards. It should have been angrier, more inflammatory and debatable.

NOT BAD...THOUGH WE SHOULD BE FEELING MORE WHEN ALL IS SAID AND DONE