IRON MAIDEN Goes to the Movies

In case you didn’t know, Iron Maiden is a veteran heavy metal band from England. They’ve been around for almost 40 years, their most successful period being the 1980s. As a young impressionable headbanger, I loved everything about them from the beginning...the chugging riffs, the intricate guitar solos, the soaring vocals. Then there’s the often-violent artwork of their album covers, which enticed kids and outraged conservative groups. 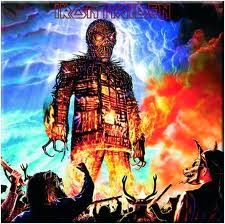 But what I loved most were Iron Maiden's lyrics. While many 80s bands sang of partying, banging groupies and the glory of rock & roll, Maiden based many songs on the works of Edgar Allen Poe, Nathaniel Hawthorne, Samuel Taylor Coleridge and Frank Herbert, to name a few. They’ve also written about Alexander the Great, Greek mythology, ancient Egypt, war history, Biblical prophecy and the plight of the American Indian. Additionally, Iron Maiden have covered the advent of the atom bomb (“Brighter Than a Thousand Suns”), corporate greed ("Be Quick or Be Dead"), war from a soldier’s perspective (“The Trooper,”), famous military battles (“Paschendale”) and, of course, numerous scary things which go bump in the night.

A band after my own heart, they also drew a lot of inspiration (lyrically and visually) from movies, new and old, classic and not-so-classic. Sure, many artists have occasionally found inspiration on the silver screen, but seldom with the sincerity of Iron Maiden, who always seem to have a deep fondness for the subjects they choose to write about. The following list is by-no-means comprehensive, nor are all of these songs necessarily great (in fact, a few of them suck), but they are the ones most-obviously inspired by specific films.

“Children of the Damned” (from the album The Number of the Beast) - This song is based on the 1964 British horror film of the same name, a sequel to the far-superior Village of the Damned. Lyrically, the song just as effectively tells the story of the first film, but somehow, damned 'children' sounds a lot more metal than a damned 'village.'

“The Number of the Beast” (from the album The Number of the Beast) - This is arguably Maiden’s signature song, and in the 80s, made controversial by conservative idiots who never bothered to actually read the lyrics. Songwriter Steve Harris was inspired to write it after having a nightmare from watching Damien: Omen II. Unofficially, this also makes Harris the only guy on Earth who was ever scared by Omen II. The song draws equal inspiration from Robert Burns' poem, "Tam O' Shanter."

“Where Eagles Dare” (from the album Piece of Mind) - War, both fact-based and fictional, has always been one of Maiden’s favorite lyrical topics. Most of their albums include at least one song inspired by historic wars, legendary battles or works of literature on the same subject. This one is based on the 1968 WWII action film of the same name, starring Clint Eastwood and Richard Burton.

“Caught Somewhere in Time” (from the album Somewhere in Time) - Maiden’s penchant for science fiction & fantasy became more prominent as their career progressed, most notably with their sixth album. In addition to the detailed Blade Runner-inspired artwork of the cover (one reason I still truly miss LPs), half the songs deal with otherworldly subjects. The woefully-underrated title track was inspired by the 1979 fantasy film of the same name, Time After Time, starring Malcolm McDowell.

“Heaven Can Wait” (from the album Somewhere in Time) - This is based on the 1978 fantasy film of the same name, starring Warren Beatty. Considering the movie’s whimsical nature, it seems like an unlikely inspiration for a heavy metal band, but the song is widely considered a Maiden classic from that era. This is also one of Maiden's songs it's almost impossible not to find yourself singing-along with.

“Man on the Edge” (from the album The X Factor) - The 1993 film, Falling Down, starring Michael Douglas, is a bleak commentary on American values…hardly conducive to a song treatment, which Iron Maiden proves on their first album without iconic, long-time singer Bruce Dickinson, who had just left the band. The lyrics by replacement singer Blaze Bailey are simplistic, stupid and almost painful to read (like they were written by a reluctant 7th grader in a poetry class). While commercially, this song was one of the few bright spots during Maiden’s Blaze Bailey era, it is a lyrical low point well below their usual standards.

“The Edge of Darkness” (from the album The X Factor) - Francis Ford Coppola’s 1979 classic, Apocalypse Now, has inspired numerous artists over the years. As a band with a penchant for war songs, it isn’t surprising Iron Maiden eventually got around to it as well. Musically, it's as dull & rambling as the final act of the movie which inspired it, but the lyrics are suitably dark and mournful.

“The Clansman” (from the album Virtual X) - Based on the 1995 film, Braveheart, starring Mel Gibson, this epic track is one of the few memorable songs from the Blaze Bailey era. One can even imagine this song being suitable accompaniment to the bloody battle scenes.

“The Wicker Man” (from the album Brave New World) - The 1973 classic of the same name (not Nick Cage's bastardized bee debacle) provided the inspiration for this song, the opening track on Maiden’s first album with Dickinson back in the fold (after a sorely-missed, decade-long absence). Compared to Maiden's glory days, it's no classic, but at the time of its release, the catchy chorus and fiery guitar work made this their best song in years.