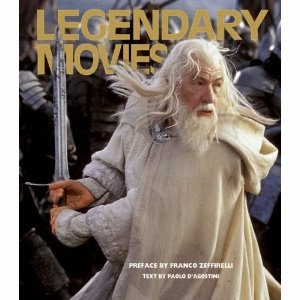 One thing is certain…if I were to drop this book, there’s a good chance it would break every bone in my foot. Legendary Movies is a huge, hefty (and expensive) coffee table book with a holographic 3-D hardcover and 600+ glossy pages featuring hundreds of photos & individual chapter summaries of the 130 films selected. If nothing else, this is a big, beautifully put-together book.

Regarding those 130 films…this is NOT a collection of the greatest movies of all time, as author Paolo D’Agostini quickly points out in the introduction, which you really need to know before you pop a blood vessel over his inclusion of the Twilight saga. These films are selected for their historical importance, influence and cultural impact, from the silent era to 2012. Many of the usual suspects are here (Citizen Kane, Gone with the Wind, Casablanca, 2001, The Godfather, Star Wars, Apocalypse Now, Schindler’s List, etc.) along with some unusual suspects (Escape from New York, American Gigolo, Nine ½ Weeks, The Last Samurai), influential foreign films (Seven Samurai, Amelie), game-changing technical achievements (Lord of the Rings, Avatar) and pop-culture phenomenons (Twilight, Grease, Jaws). Each film’s plot is summarized in detail (spoilers and all), along with occasional bits of trivia and behind-the-scenes stories, though there isn’t much here that well-versed movie nerds probably didn’t already know.

Even though D’Agostini admits any book like this is highly subjective and will have some readers incredulously lamenting the exclusion of certain films, the list of titles not included is rather staggering…Bonnie & Clyde, The French Connection, Vertigo, Night of the Living Dead, The Day the Earth Stood Still, Patton, Airplane!, To Kill a Mockingbird, Annie Hall, The Searchers, Stagecoach, The Great Escape, Die Hard, and every animated Disney film ever made. The list could go on and on, which is fine because part of what makes books like this fun is getting your panties in a bunch over what the author leaves out.

However, D’Agostini makes is personal tastes quite apparent on several occasions. He doesn’t hold comedy or animation in high regard (designating The Blues Brothers as a flop, even though, despite its bloated budget, was a financial hit in theaters). It’s also obvious he’s not the world’s biggest Hitchcock fan, giving only Rear Window and Psycho ‘legendary‘ status, and still regarding Psycho (one of the biggest mainstream hits of the 60s) as a nothing more than a cult film. On the other hand, he clearly loves the work of Ridley Scott, including four of his films (Alien, Blade Runner, Thelma & Louise, Gladiator) and even fudging facts surrounding Blade Runner’s box-office performance…the film bombed in theaters, only growing in stature over the coarse of many years. Still, D’Agostini writes as though it were a blockbuster from the get-go.

The book really drops the ball regarding film franchises, a major part of the industry during the past 40 years. For example, only the first film in the Star Wars franchise is included, which is initially understandable, since it’s the one which started it all. But then why, in later chapters, is every film in the Bourne, Twilight and Pirates of the Caribbean franchises included? Sure, they’re fun…but is every one of them legendary? I doubt there’s anyone out there who can honestly argue the Star Wars saga isn’t the most culturally-significant franchise of all time.

Then there’s the issue of superhero films, currently the most popular genre in the world. Sure, what’s considered the first, best or most influential can be argued endlessly, but the only film given its own chapter is Batman Returns, Tim Burton’s inferior sequel to the film which arguably breathed new life into the genre. It's immediately obvious superheroes aren’t the author’s forte. In fact, one might suspect he hasn’t-yet even seen such genre-defining films as X-Men or The Dark Knight.

But in the end, I’m nitpicking. There will never be a definitive historical volume on the most legendary films in history, nor should there be. I could write a similarly subjective book and garner the same reaction from readers outraged by films I chose to exclude. Books like this are meant to be scrutinized, debated and discussed among movie nerds. That’s what makes them so fun to read.

I just wish the damn thing weren’t so heavy.