In Appreciation of PETER HYAMS 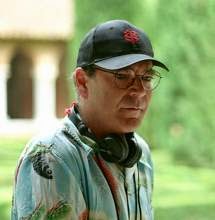 Few casual moviegoers are likely to know this prolific director by name. He’s not a superstar whose reputation sells a movie. He has helmed many successful films, but never a runaway blockbuster. None of them are classics, none ever won an Oscar (or were even nominated for one). None will ever be lovingly remastered or restored by Criterion for a multi-disc Special Edition. As far as I know, there’s never been a Peter Hyams film festival or college course focusing on his body of work.

But if you’ve been around awhile, chances are you have seen and thoroughly-enjoyed at least one of his movies - probably more than one - on cable or DVD. None are high-art, but a lot of them are really fun, fast and very clever (some written by Hyams himself, making him a bit more than a director-for-hire).

In researching Hyams’ career, I was fairly surprised to learn he was once a CBS News anchorman, and was also a good-enough jazz drummer to play with the likes of Maynard Ferguson. Impressive, but hardly a resume likely to parlay into a lucrative life as a filmmaker.

But it is his long, productive (and woefully-unappreciated) directorial career which deserves more attention than it gets. No one will ever confuse Hyams with Hitchcock or Spielberg, and yeah, the guy has made some crappy movies, but even Spielberg screwed the pooch on several occasions. When you look back at Peter Hyams’ entire filmography, he directed a surprising number of really good films for someone hardly anyone's ever heard of. For example...

CAPRICORN ONE (1978) - This is every conspiracy-theorist’s wet dream, which depicts NASA’s first attempt to send astronauts to Mars, only to discover such a mission is impossible, so they fake it. Once the crew of Capricorn One (James Brolin, Sam Waterston, O.J. Simpson) realize that the only way for NASA to successfully pull this off is to kill them, the film becomes a fight for survival in the high desert. Elliot Gould plays...well, Elliot Gould...a gonzo reporter who slowly uncovers clues suggesting the televised space flight never happened. This is a fun film with ample does of humor and some astonishing chase scenes that are still impressive today.

OUTLAND (1981) - This is gritty, violent, adult sci-fi that’s often been called High Noon in space. Sean Connery plays a weary law-enforcer assigned to keep the peace on a mining colony on Io, one of Jupiter’s moons...only nobody really wants him to enforce the law. This becomes clear after several miners go apeshit and kill themselves due to their addiction to a synthetic drug created to boost production. Still, the powers-that-be (led by Peter Boyle) send assassins to kill Connery. Outland is similar to Alien in look and tone, but essentially a cop drama that happens to be set in outer space. Like a lot of Hyams’ films, there’s a great deal of witty dialogue and attention to character.

THE STAR CHAMBER (1983) - This criminally underrated thriller stars Michael Douglas just before Romancing the Stone and Fatal Attraction turned him into a bankable leading man. Here, he plays a judge, frustrated at the number of criminals he’s forced to acquit due to legal loopholes. He’s approached by a shady group of fellow judges, who hold their own court outside the law, then hire assassins to carry out the sentences. He’s happy to join this organization, at least until he discovers evidence which proves the innocence of someone they initially decided was guilty, yet the rest of them refuse to change their verdict. The Star Chamber is a suspenseful & paranoid conspiracy thriller, similar in tone to The Parallax View and definitely worth seeking out.

2010 (1984) - You gotta admit it takes a huge set of cajones to write and direct a sequel to what many think is the greatest sci-fi film of all time, not to mention the very definition of a sequel no one was asking for. Still, Hyams (working with original 2001 author Arthur C. Clarke) creates a film that, while technically a sequel, is a damn fine stand-alone film in its own right. The special effects are very good for its time, and while the ultimate revelation is admittedly a bit too literal (considering the original’s intentional ambiguity), 2010 is intelligent science fiction for those who think the genre is beneath them.

NARROW MARGIN (1990) - Loosely based on the 1952 film noir, The Narrow Margin, Gene Hackman plays a district attorney desperate to put-away a cruel mob boss and forced to escort the lone witness to a murder back to L.A. to give testimony. All the while, both are hunted by numerous hired assassins. There are plot holes a-plenty, but Hackman is terrific as usual, as is Anne Archer as the witness, and their antagonistic relationship in-between murder attempts and gunfights is amusing.

TIMECOP (1994) and SUDDEN DEATH (1995)  - These two films speak volumes of Hyams’ unsung talent. After all, he managed to direct the only two Jean Claude Van Damme movies worth watching a second time. Timecop is a surprisingly clever sci-fi action thriller, which occasionally reaches the creative heights of The Terminator regarding the concept of time travel (not to mention the semi-classic scene where Van Damme performs wince-inducing splits during a fight). Sudden Death is a Die Hard knock-off, but not only is it often intentionally funny (check out the fight-to-the-death between Van Damme and a Pittsburgh Penguins mascot), Hyams manages to coax a pretty decent, even vulnerable, performance out of Van Damme himself.

THE RELIC (1997) - This film is essentially Alien-at-a-museum. But even though it’s highly derivative, with questionable special effects at times, The Relic makes up for its shortcomings with a wild premise, amusing dialogue, terrific performances (specially Tom Sizemore, likeable for once) and a few well-timed scenes of spectacular gore.

Like any other filmmaker, Peter Hyams directed numerous movies of dubious quality throughout his career (Hanover Street, Stay Tuned, The Presidio, End of Days, etc). However, he was responsible for a slew of solid popcorn flicks that are smart, quirky, funny, suspenseful and entertaining.

It would be a shame if we were to forget that.
Posted by D.M. Anderson at 9:58 PM