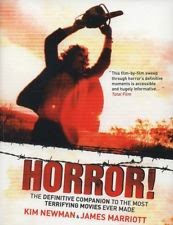 For film geeks, the next best thing to watching movies is reading about them. I have dozens of film-related books in my own library, from annual movie guides to reference books of specific genres, from director biographies to significant eras in film history, from academic analysis to barely-disguised fanboy worship. As one admittedly-inclined to bring reading material for lengthy bathroom excursions, books like these are perfect crapper fodder.

But one inherent problem with being a well-read movie geek is you eventually begin reading the same factoids, trivia, critical assessments and behind-the-scenes anecdotes over and over again. It becomes increasingly difficult to find anything new or useful you haven’t read before.

Which is what makes Horror!, by Kim Newman & James Marriott, an indispensable volume for any fan of the genre. Its subtitle, ‘The Definitive Companion to the Most Terrifying Movies Ever Made,’ is well-earned. This book is a phenomenally-detailed, decade-by-decade critical history of horror cinema, from its humble beginnings in silent film through 2012. If you think you know everything, this book will prove you don't.

Horror! doesn’t come close to covering every terror to ever hit the screen (nor does it claim to), but damn-near every classic, influential or noteworthy horror film (good and bad) is discussed in detail by numerous authors who know the genre inside and out. Whether they’re box office smashes, foreign obscurities or rare cult items, we understand what makes these movies important contributions to the genre (even if we don’t necessarily like some of them). This also means, with a few exceptions, little space is wasted on needless sequels which often run horror franchises into the ground (besides, do you truly think there’s anything interesting to learn about any of the Saw sequels?).

Among the individual film entries are detailed essays focusing on the histories of specific subgenres (vampires, zombies, mad scientists, slashers, etc.), strategically placed in the book’s timeline, roughly around the time they first appeared onscreen.

What I truly appreciate about this book is the authors’ willingness to acknowledge a classic film’s influence, yet still concede that the dialogue and performances in a cinematic sacred cow like King Kong are actually pretty terrible. Similarly, the original Friday the 13th may be one of the most influential slasher films of the 80s, but that doesn’t necessarily make it a good movie, which this book argues in great detail. In other words, Horror! is not written by fanboys for fanboys. Though each individual entry is obviously subjective, it’s written in near-academic language by knowledgeable writers who are able to provide compelling arguments of a particular film’s virtues and shortcomings

This is the most knowledgeable, detailed and comprehensive book I’ve ever read about the horror film genre, worth repeatedly revisiting during trips to the bathroom (sorry, that’s where I think reference books are the most fun to read). I don’t necessarily agree with every individual assessment of certain movies included in its pages (what would be the fun in that?), but more often than not, arguments contrary to my opinion are at-least intelligent and articulate. This book is a must-own for any true horror movie fan.