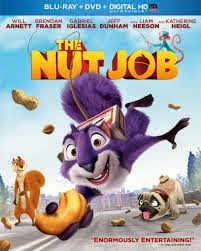 Once again, I have called upon the youngest movie fan in my household, Lucy, to provide her invaluable assistance and insight in reviewing The Nut Job.

I feel sorry for critics who don’t have a kid handy when reviewing discs like this. Unlike the Disney/Pixar canon - and the occasional homerun by DreamWorks - these movies can’t be appreciated without a kid in the room…the intended audience.

If I’d have watched The Nut Job by myself, I’d develop my assessment with adult eyes, then verbally rip it to shreds, damning its rudimentary animation, unimaginatively-rendered (sometimes unlikable) characters, pandering scatological humor and gratuitous stunt-casting in order to add marquee value. Not only that, the story itself is not enough to justify its already-scant running time (not surprising, considering it’s expanded by the director from one of his earlier, crudely-animated shorts). Here, the animal residents of a city park, led by Raccoon (Liam Neeson), face starvation due to a shortage food. After the fiercely selfish and aptly-named Surly (a squirrel voiced by Will Arnett, sounding just like his Batman role in The Lego Movie) compromises everyone’s chances for survival, he’s banished from the park. Later, Surly discovers a treasure-trove of food  in a local Nut Shop, which has also been taken over by mafia gangsters (led by King, voiced by Stephen Lang) who plan on using it to gain access to the bank next door. In other words, both animal and human are planning a massive heist from the same location.

An amusing scenario for a short film, perhaps, but needlessly padded out here with the usual cliches which make The Nut Job just another creatively-bankrupt ‘family’ film designed to clean out parents’ wallets…fart jokes, eye-rolling ‘nut’ puns, unimaginative slapstick, heavy-handed themes of friendship and totally out-of-place & pandering pop culture references (especially when an animated version of Psy shows up to dance to his hit “Gangnam Style” along with the film’s characters during the end credits). The movie is only partially redeemed by a fairly rousing climax and resolution.

But that’s if I were to watch the film alone (when I would have shut it off after twenty minutes). Lucy, who’s 10, had a great time. She was totally enthralled from the get-go, laughed aloud at many of the jokes & sight gags. She loved the character of Buddy (Surly’s hapless rat sidekick), became sad when it briefly looked like things wouldn’t end happily, and expressed her joy when (SPOILER ALERT!!!!…but not really) everything turned out hunky-dory. She even started rocking when “Gangnam Style” played over the credits. As a parent, I got a lot of enjoyment out of her enjoyment, which made The Nut Job worth enduring.

In other words, The Nut Job is a generic 'family film,' meaning the whole family won't likely enjoy it. But if seeing your little ones happy brings you personal pleasure, it’s worth sitting through at least once before forever-vanquishing it to their bedroom TV, where it’ll entertain their friends during sleepovers.