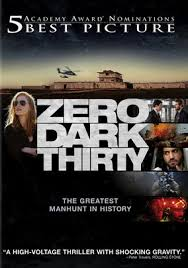 Being that they have the same writer and director, obvious comparisons are drawn between Zero Dark Thirty and The Hurt Locker. Both are darkly similar in tone, and display a great deal of technical virtuosity in their visceral depiction of action scenes. Both are inspired by real events in recent history. Both received heaps of critical praise and ended up on many year-end best-of lists. And of course, both were nominated for a lot of Oscars. The Hurt Locker won for Best Picture, but while pre-release hype touted Zero Dark Thirty as an Oscar front-runner, ensuing controversy (that it supposedly had a pro-torture agenda) pretty-much sealed its fate, especially after the late outpouring of goodwill toward Argo (which did deserve to win).

The oft-discussed torture scenes in Zero Dark Thirty, while uncomfortable to watch, are few and far between, and certainly don't leave the average viewer the impression that the filmmakers have some sort of pro-torture agenda. Instead, we feel like director Kathryn Bigelow and screenwriter Mark Boal are simply presenting events as they supposedly happened, leaving the viewer to either commend or condemn the characters' actions. Like the equally-maligned JFK, Zero Dark Thirty is a movie first, a political statement last.

As such, it is a much better film than The Hurt Locker. Personally, I think The Hurt Locker is overrated, and not even close to deserving Best Picture. Zero Dark Thirty isn't either, but taken simply as a film rather than a history lesson, it is far more compelling, with a stronger main character (Jessica Chastain as Maya) and more-focused narrative. After all, despite what you personally think of everything that has transpired since 9/11, who wouldn't be fascinated by the details behind our government's hunt for Osama Bin Laden?

﻿﻿﻿﻿﻿﻿
Contrary to the movie's critics, Zero Dark Thirty eschews most of the inherent political and moral baggage to focus on this hunt for the world's most notorious terrorist, making it a compelling journey. After a fairly slow-moving start (when countless suspects and names are thrown at us), the movie builds a considerable amount of suspense as its primary characters start to close in on their quarry. Even though we all know the ultimate outcome, the final act is action-packed and suspenseful, and we really feel like we're watching events exactly as they transpired.

But it does take a long time to get to that final act. Since Zero Dark Thirty takes place over the course of many years, characters come and go, and normally that's fine, but we are set-up to believe some of them carry more importance to the plot than they actually do. Ultimately, the movie ends up being thirty minutes longer than it needs to be.

But as a dramatic experience, Zero Dark Thirty lends itself to repeated viewings far better than The Hurt Locker. We simply like these people more (even those who initially come across as uncaring, sadistic bastards), and have more personally invested in their success or failure. What's truly amazing is both The Hurt Locker and Zero Dark Thirty were directed by a woman whose first 'big' movie was Point Break, one of the most unintentionally funny movies of all time.

Special Features: No Small Feat - making-of featurette The Compound
Geared Up - the weapons and equipment used by the actors Targeting Jessica Chastain - featuring the lead actor