OLYMPUS HAS FALLEN: Comfort in Predictability 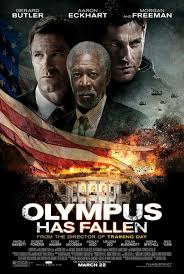 
Since it was payday, I invited my wife out to the movies.

"What's playing?" she asked.
"Olympus Has Fallen," I replied. "That movie with Gerard Butler about terrorists in the White House. Looks like a Die Hard thing."
"What else is playing?"
"Uh...Olympus Has Fallen. I wanna watch shit explode."

I get less adventurous as I get older. I don’t roll the dice with my discretionary income like I used to. This exasperates my wife on occasion, especially during those rare times when the stars align and we’re able to enjoy a night on the town without the kids. She likes to try new restaurants with foreign cuisine. I, on the other hand, have problems with shelling out a C-note for a dining experience which has a 50% chance of sucking. Whenever the decision is left to me, we usually end up at Red Robin or the Chinese joint down the road from our house (about as close to foreign cuisine as I like to get), because at least I know what's gonna end up on my plate.

And as much as I hate to admit this, I've developed the same attitude when it comes to going to movies. Back in the day, I took chances on all kinds of stuff...character dramas, independent films, comedies, horror flicks, etc. But as I get older and movie-going gets more expensive, not only do I not go as often as I used to, I'm less willing to gamble with my hard-earned income. There's nothing worse than spending fifty bucks for two tickets, a tub of popcorn and a couple of drinks to sit through a comedy that isn't funny, a horror movie that isn't scary or a critical darling where you leave the theater wondering if said-critics had been drinking Drano (and it goes without saying none of the art-houses downtown have gotten my business for a long time).

So most movies we choose to see are just like the Bleu Ribbon Burger I order every time at Red Robin...safe bets which pay off more often than not. That list of safe bets is pretty short:


Regarding that last thing on the list, you know the formula: an arrogant & super-intelligent terrorist/criminal/disgruntled employee and his henchmen lay siege upon a skyscraper/boat/train/city and threaten large-scale destructive wrath unless their demands aren't met. It's up to ONE MAN (disgraced agent/troubled cop/Navy Seal) who just happens to be in the wrong place at the right time, to not only rescue his wife/buddy/family/President/beloved housepet, but single-handedly kill every single bad guy. Along the way are big, loud scenes of massive & fiery destruction which go a long way in masking any plot holes.

All this started with 1988's Die Hard, pretty much the Star Wars of action movies. It's been ripped-off and imitated so many times ever since that the term "Die Hard on a..." is practically its own genre. Speed 2 notwithstanding, it is a hard concept to fuck-up (hell, I even enjoyed Jean Claude Van Damme's Sudden Death). 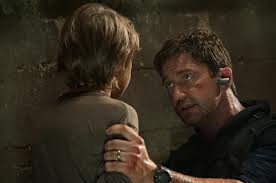 "Are you ready for the cinnamon challenge?"

As for Olympus Has Fallen, I was ready to part with the cash in my wallet the second its trailer showed the Washington Monument crumbling to the ground. Yeah, it's Die Hard in the White House, and what most probably were hoping A Good Day to Die Hard could have been. As such, I'm pretty sure the screenplay was actually more like a checklist:

As Die Hard clones go, Olympus Has Fallen doesn’t offer a single surprise or twist that a fan of the genre won’t see coming a mile away, but that is actually its greatest virtue. It knows the formula and milks it better than any similar movie since The Rock, doing so with a lot of panache. Like riding the same roller coaster at an amusement park countless times, or when I order the same hamburger every time I go to Red Robin, we know what’s coming, but that doesn’t make it any less satisfying. This movie delivers exactly what you expect...cinematic comfort food.
Posted by D.M. Anderson at 1:54 PM

Nice review D.M. Absolutely stupid, but well worth the watch for exactly that: fun, stupid, and dumb fun.