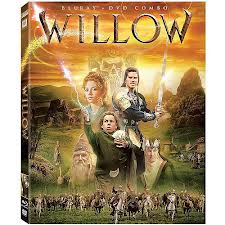 In this post-Lord of the Rings era, I suppose a movie like Willow must seem pretty quaint. Special effects have advanced so much over the 25 years since its release that the visuals look downright archaic. Of the movies released in the 80s that have gone on to become classics, Willow seems to be largely forgotten, which is sad when you consider this was the first film to effectively utilize the computer-generated 'morphing' process in creating one of its key scenes. This process had a huge impact on special effects technology at the time, easily as groundbreaking & influential as the stop-motion wonders in the original King Kong or the use of blue-screen in 1940's The Thief of Bagdad. This alone is reason enough for Willow to be considered a movie milestone. Without morphing, it is unlikely James Cameron could have made Terminator 2 (the film most-associated with the process).

Aside from that, Willow is the best movie George Lucas ever attached his name to that doesn't have Star Wars in the title. Storywise, it ain't anything original. In fact, the movie is Star Wars with a lot of Lord of the Rings thrown in. But it's a hell of a lot of fun, and free of the arty pretensions which sometimes makes Lord of the Rings (as good as it is) a chore to sit all the way through. Whereas Peter Jackson was striving for serious cinematic artistry, using Tolkien’s original trilogy as his bible, director Ron Howard simply cranked out a popcorn movie which essentially tells a similar story in a fraction of the time.

Additionally, Willow is arguably the last George Lucas movie where just as much care is given to the characters and performances as the action and special effects. Like the original Star Wars trilogy, we truly like the heroes and despise the villains, even if most of them are composite caricatures. Considering how the Star Wars prequels turned out, this is more likely due to Howard’s direction and Bob Dolman’s witty screenplay than Lucas’ original story. The performances hold up pretty well, too. Val Kilmer has never been this likable or charming before or since; not only is he the heroic/romantic lead, he also provides a majority of the comic relief. And although third-billed, most of the film rests on Warwick Davis’ shoulders. As the title character, his role is similar to Mark Hamill’s in Star Wars, and Davis manages to make us care a lot about Willow, even though he’s stuck with uttering some of the movie’s worst lines.

So sure, the special effects are now pretty phony looking (especially noticeable on this Blu-Ray release), and the story is derivative. But for an unpretentious fantasy film made during a time when no one else was making them, Willow definitely deserves a second look 25 years later.