GRIZZLY and the Stupidity of Children 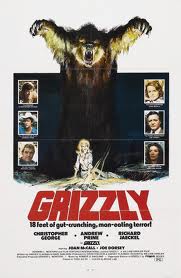 
Kids are dumb. I know this because I teach middle school.


I begin each day of my 7th grade English class with a warm-up writing exercise, where students respond to a prompt on the screen. It's mostly silly stuff, like 'write about a time you were scared,' or 'what would you do with a million dollars?'. But occasionally, I try throw them something a little more challenging, one of my favorites being 'name the greatest American who ever lived.' I get an amusing variety of responses on that one. Sure, there are a few who actually think about the question and provide such reasonable responses as Lincoln, Washington, Kennedy and King. Right now, a lot of kids select Obama, probably because he's the one president they're familiar with.


Then there are the wacky answers, such as Michael Jackson, Justin Beiber, Lebron James, etc. My all-time favorite was, 'I don't know who the greatest American was, but I know the dumbest...my brother.'


Several years ago, one girl actually responded with Mike Tyson. When I read that, I said to her, "So let me get this straight...you believe Mike Tyson, a disgraced athlete who once bit off an opponent's ear and went to prison for rape is the greatest American who ever lived." She sheepishly shrugged and replied, "Yeah, because we named our dog after him."


For some students, my warm-up questions are apparently above and beyond challenging. Further evidence that kids are dumb is when I ask them to write about the best movie they've ever seen. Seems simple enough, right?


I do not expect them all to have experienced Citizen Kane, although there's the occasional kid who mentions Grease, The Wizard of Oz or the original Star Wars. But for the most part, less than 1% ever write about a movie that came out before they were born. And that's to be expected; even though I'm getting on in years, there are very few movies made before I popped from my mom that I would list among my all time favorites.


One year, several boys responded with Alien vs. Predator, which briefly oozed into theaters that previous summer. I offered my two cents, saying it didn't hold a candle to the original Alien. One kid's stunned reply was, “There was another Alien movie?” Okay, I understand that, since there's a  common middle school philosophy that nothing existed before they were born. But I won't ever forgive this other kid who had seen the original and proudly stated AvP was far better because it was newer, therefore more realistic. This was one of those times I wished they still allowed paddling in schools.


Year in and year out, most kids tend to equate the best movie they've seen with the last movie they've seen. Currently, a lot of 'em cite The Hunger Games, Ted and The Avengers as the greatest films of all time (that's right...even the girls' beloved Twilight saga reached its expiration date). This used to bug me, until I took a good look back into my own past. Like everyone on Earth except my high school History teacher, I was a kid once, too...and just as dumb. Maybe even dumber because, after seeing 1976's Grizzly, I thought it was bigger, better and scarier than Jaws.


Jaws is widely-considered one of the greatest movies ever made (the greatest, in my humble opinion). It's on several AFI best-of lists in various categories. It was nominated for four Oscars, winning three (losing Best Picture). It also was the first film to earn over $100 million at the box office and, adjusting for inflation, is still the seventh biggest movie of all time. 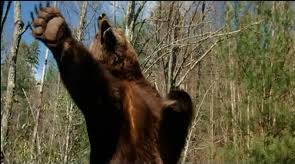 Grizzly, on the other hand, is a low-budget Jaws knock-off. In fact, it is Jaws, only with a giant bear instead of a shark, a national park instead of an island, a park ranger instead of a sheriff, a chopper pilot instead of a boat captain. Even several scenes are nearly identical...shots from the beasts' POV, climaxes where said-beasts explode, dumbass authority figures proven wrong by our hero, Susan Blacklinie as a victim (though uncredited in Grizzly). Even the movie's poster art was similar to the one for Jaws.


“18 feet of gut-crunching, man-eating terror!” touted the tag-line in ads back in'76, roughly a year after Jaws first scared the living shit out of everybody with a pulse, including yours truly. That was enough for me to be first in line the day Grizzly opened.


I thought Grizzly was awesome. Sure, this was just Jaws-in-the-woods, but Grizzly was brand new and Bruce the shark was a distant memory. In 1976, when they didn't show-up on-demand or on disc a few months after their theatrical runs, movies became distant memories really fast, especially when you were 12. So for a long time, I thought Grizzly was the better of the two movies, not that it was scarier (it ain't scary at all). In fact, the co-feature playing with Grizzly at the time, a William Castle cheapie titled Bug, disturbed me a lot more (especially a scene where a fire-spewing cockroach barbecues a cat...man, I was days getting over that).


No, Grizzly was simply better because it was new and I was stupid. When you're stupid, you don't notice all the dumb dialogue, you don't notice how cheap the movie looks, you don't realize Christopher George is no Roy Scheider, and you sure-as-hell don't compare William Girdler's meager talents to those of Spielberg (in fact, you don't even know who the hell Spielberg is).


But my eyes were opened a few years later when Grizzly aired on TV, retitled Killer Grizzly, apparently to avoid confusion with the huggable, fun-loving grizzlies that play with our kids in the back yard. It was the same old film, though, only this time I could see it for what it was...a knock-off of a classic.


I'm making it sound like the movie is garbage, but as Jaws imitators go (and there were a lot of 'em back then), Grizzly ain't bad at all. It's pretty fun & fast-paced, reasonably well-acted by its D-list cast and makes the most of its limited financial resources. In fact, I'd say more creativity and care was put into this Jaws rip-off than any of that film's official sequels. As for me, the movie holds a great deal of nostalgic value. I still pluck it from my DVD shelf now and again to enjoy a good laugh...not at the movie (though it's sometimes unintentionally funny), but at my younger self for ever thinking Grizzly could be a better film than Jaws.


And I'm sure when that maladjusted AvP-loving student of mine pulls his head out of his ass later in life, he'll do the same thing. Because kids are dumb, but most don't remain dumb forever.
Posted by D.M. Anderson at 8:54 PM