STAR TREK II: THE WRATH OF KHAN and the Collection of One 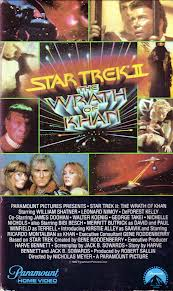 This is largely considered the best of the Star Trek movies featuring the cast from the original series. It's my favorite, too, but the only one I probably can't watch again.

A long time ago, in a galaxy far, far away (when dire finances forced me and my wife to relocate to Cleveland, Ohio), VCRs were still a fairly new thing and very expensive. I was envious of anyone who could afford such a luxury in their living room. But as fate would have it, I lucked into $200 that I didn't need to commit to bills or personal debt. That wasn't lot of money even back then, but when you're down-and-out it's a fortune. I probably could have used it for something practical, like work clothes, a new car muffler, or treating my then-wife to a night out (even though I was enjoying her company less and less). Those ideas did briefly cross my mind for a second or two before I knew exactly what I should blow my extra cash on...my own VCR.

This was easier said than done, because most were still in the $400 range, but lo and behold, after a bit of searching, I found one at Sears. The price: $180. It was a beauty...a top-loading, big-ass Sony that was roughly the size of a toolshed. I couldn't believe my luck.

The downside? It was a Betamax. 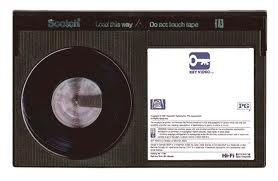 Betamax was developed in the mid-1970s by Sony and was the first home video format. VHS came along a few years later, and although the picture quality wasn't quite as good, it was cheaper and the tapes allowed you to record longer. After most other VCR manufacturers jumped onboard the VHS bandwagon, Sony ended up the big loser in the format war. By 1985, the reason I was able to snag a brand new Betamax VCR for $180 was because there wasn't a demand for them anymore.

But I didn't care about that at the time. I just wanted to enjoy movies in the comfort of my own home whenever I wanted. From the second I slapped my nine twenty dollar bills on the counter in the electronics section at Sears, I felt like a big shot.

Back then, most people who had VCRs used them to record stuff or rent movies. I did some of that, too, but the main thing I wanted was to have my own movie library, a collection of favorites proudly displayed on my shelf like a rare book collection. As a life-long movie lover, it was my idea of Heaven. However, in the mid-80s, most movies newly-released on home video were intended for rental, not sale. The price to actually buy most new movies ranged from $50-100. What usually happened was, roughly a year or two after a movie's theatrical run, it would be released on home video for rental. Once the rental revenue was saturated (another year or two), the price to actually buy the movie would drop to a more consumer-friendly twenty bucks.

But not every studio did this. Paramount and Disney seemed to know right away there were a lot of folks like me who'd buy a newly-released movie right away if the price was right. Hence, some of the shopping mall record stores began stocking a small shelf of movies for sale. With the remaining twenty bucks from my VCR purchase, I snapped up a copy of Star Trek II: The Wrath of Khan. I was giddy...for the first time in my life, I actually owned a movie, free to watch it whenever I wanted and never had to return it to the video store the next day.

That first experience of popping Star Trek II into my own VCR was awesome. There I was on a Saturday night, watching a theatrical film I paid to see in theaters only a few years before in the comfort of my tiny apartment. Man, technology was wonderful!

However, when you have caviar tastes on a tuna fish budget, you are brought down to Earth in a hurry. I had a job which allowed me to live paycheck-to-paycheck and had little discretionary income. Sure, if I was lucky, I could afford to rent a movie now and then, but most video stores carried very few Betamax videos, so I ended up watching Star Trek II a lot, the novelty of watching a movie whenever I pleased slowly dissipating with each viewing. I began to notice things in the movie I didn't want to...Shatner's hairpiece, Ricardo Montalban's nipple-free chest and the fact that most of the supporting cast from the original Star Trek series are actually shitty actors.

Soon after, Betamax went the way of the Dodo bird. Less than a year after I bought my first VCR, most Betamax movies could be found in clearance bins. I grabbed a lot of shit from those bins, even movies I didn't necessarily think were worth owning, just to have something - anything - to watch other than Star Trek II.

So today, even though Star Trek II is the best film in the entire franchise, and I have it on DVD (mostly to round out my collection of all the Trek films), I still haven't even taken the plastic wrap off the box. I don't know if I'll ever watch it again. Hell, I still know every scene by heart, so maybe I don't need to.
Posted by D.M. Anderson at 1:09 PM