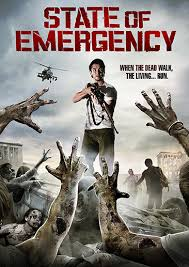 When this disc showed up in the mail, my youngest daughter, Lucy, took one look at the box and pleaded, "A zombie movie! Cool! Can we watch it tonight, Daddy? Can we, can we, can we?" Lucy's my little horror buddy, and zombies are her favorite. We've spend countless Friday nights camped-out on the sofa watching gut-munchers of all sorts. How could I say no?

But being a zombie movie fan takes a lot of patience, since the bad ones far-outweigh the good ones. Because they're relatively inexpensive to make, so damn many are perpetually pumped-out by would-be Romeros that wading through the gore to even find ones that are "simply okay" is a small victory. For every Dawn of the Dead, there's a thousand pieces of celluloid shit some idiot shot in the woods near his house. Being a zombie fan means keeping your expectations really low.

And my expectations for State of Emergency were  low indeed. First, I'd never heard of the thing. Second, according to IMDb, director Turner Clay has almost no track record. Third, the film gets off to a bad start by being a zombie movie without any fucking zombies.

But as all zombie fans know, every now and then, one comes along that, despite its budget or lack of originality, turns out to be a pleasant surprise. State of Emergency is one of those.

Lucy and I sat patiently during the slooooow first act, following its main character (Jim) as he lays his fiancé to rest, wanders around an empty barn and finds a rifle, wanders around some more before - finally! - a zombie shows up to try and take a chunk out of him.

“It’s about time,” Lucy quipped just before Jim takes it out with a head shot. 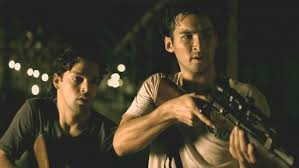 Jim later ends up in an abandoned warehouse with a few other survivors, which is where most of the remaining action takes place. He gets to this new location with relative ease because we don’t actually see too many zombies at any given time. Since the ghouls are so individually spread-out that they almost never appear to be a constant threat, we wonder why our heroes don’t just simply make a run for it. After all, they are never attacked by more than one zombie at a time, and those attacks are few and far-between. Considering the premise involves a chemical weapons leak which renders most of the community into gut-munching ghouls, one would think the area would be crawling with them. I’m pretty sure that the sparse numbers of undead has more to do with the film’s budget than its story.

Still, there’s something about State of Emergency that’s oddly compelling. It ain’t anything original, nor does offer any unique twists to the genre. The performances are okay, but nothing special. The same goes for the make-up effects, which are serviceable, but aside from a few CGI head-shots, this would likely earn a PG-13 rating. Worst of all, there are hardly any zombies!

But while the whole fortress-under-siege thing is as old as Night of the Living Dead, director Turner manages to build quite a bit of tension and suspense. Not only that, his characters are smart, interesting and likeable, which is the movie’s biggest saving grace. We want these people to survive; the best scene by-far is the one when we learn one of them is diabetic, and Jim has to venture outside to find insulin for her.

As for Lucy, the zombie fan whose opinion I value most, she was on the edge of her seat for the entire last half of the movie.

So no, State of Emergency is not gonna make anyone forget Dawn of the Dead (or even Resident Evil), but it’s well-made on a low budget, doesn’t insult the viewer’s intelligence and even provides a good scare or two along the way. For me, this joins Flight of the Living Dead as one of those zombie movies I expected to be grade-Z crap but turned out pretty cool.