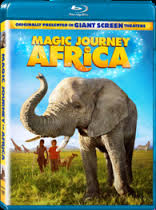 Starring Eva Gerretsen, Raymond Mvula, Adria Collado, John Whitely, Veronica Blume. Directed by Jordi Llompart. (2010, 49 min).
Image Entertainment
When you read the box, Magic Journey to Africa sounds like a spectacular IMAX-type of trip into the heart of Africa as seen through the eyes of a young girl who journeys there...you know, one of those HD nature films you buy to show off your system. And I love those things. If you haven't done so already, if you have a big-ass, 60 inch flat screen TV dominating an entire wall, do yourself a favor and pick up a Blu-Ray nature doc. Just not this one.

This is no nature doc. It isn't even a docudrama. Magic Journey to Africa is a disjointed feeble fantasy about a well-to-do girl who, after seeing a little urban street urchin steal a cell phone, becomes inexplicably inspired to find out more about him. We are never shown just how she's able to track him down in a city the size of Barcelona, but she ends up finding him bedridden in a hospital. Later, it is hinted that he dies and, according to a nurse, has gone back to his homeland in Africa.

Then, through her dreams, the girl rides to Africa on her magic winged horse (in reality, a stuffed animal) to try and find him. She meets a variety of snarky talking animals and befriends another boy who introduces her to the people in his village. At this point, the movie totally jettisons the Barcelona street urchin storyline and becomes a series of fantasy sequences that were probably created because they'd look cool in 3D.

In fact, we don't really get to see much of the real Africa. Most of the critters are CGI characters and, despite a few token panoramic shots, this movie doesn't provide anything the average NatGeo doc hasn't given us before...and better.

The answer to that is no. The so-called story is all over the place, with little transition from one scene to another. How this movie bridges the gap from discovering a young boy's heritage to a fantasy world where children's dreams keep stories alive is as much a mystery to me as trigonometry. In addition, the pace is slow, the acting is terrible and the CGI effects (even in 3D) are no more impressive than those in an expensive Super Bowl ad.

But don’t take my word for it. I watched this with my youngest daughter, who’s nine, more-or-less the age a movie like this might appeal to. As the end-credits rolled, she rolled her eyes and sighed, “Lame.”

On the plus side, Magic Journey to Africa is only 49 minutes long.

This is my blog on how Great Films Could Have Been Made Differently.

if you have time then please take a look.

I'm also looking to collaborate with a screenwriter.