RONIN: A Video Game for Grown-Ups 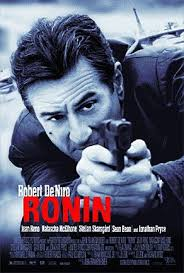 I'm a responsible, middle-aged married man and loving father of two daughters. I have been a dedicated middle-school English teacher for the past 16 years. I spend a lot of time with my family, drive an SUV, grocery shop with my wife, mow my lawn once a week and, for the most part, I'm a pretty nice guy. With the exception of my tendency to swear like a sailor and my overall physical appearance (I sorta look like 'The Dude' from The Big Lebowski), my life is a lot like Ward Cleaver's. All this considered, I'm almost ashamed to admit I love playing Grand Theft Auto, arguably the most morally disreputable video game of all time.

I've occasionally let that bit of personal info slip out in my classroom, and kids act stunned that one of their teachers would enjoy such a game. It's pretty amusing how many of them (their parents as well) assume all teachers are single-minded puritans who live, eat and breathe education 24 hours a day. Sorry to burst your bubble, kids, but some of us enjoy firing up the X-Box, and not to play Dora the Explorer.

I could provide a feeble argument that I enjoy GTA because the individual missions are challenging, but that would be like trying to convince everyone I read Playboy for the articles. To be completely honest, GTA is fun because I get to be a criminal, blow stuff up, steal shit, pick up hookers and go on a gory killing spree whenever the mood strikes me.

Regarding my frequent killing sprees...I usually let the bullets fly after I have failed a mission and have little left to lose. This is when I simply whip out my biggest weapon and commence blasting pedestrians, police and vehicles at random, and my 'wanted level' skyrockets to the point that there's no way I can escape the hundreds of cops, FBI agents, helicopters and SWAT guys trying to take me out. My goal is simply seeing how long I can stay alive before getting caught or going down in a hail of gunfire. Even though I enjoy the game, I'm not especially good at it (probably because I play only occasionally, usually after a bad day at work). And sometimes, because accomplishing some of the missions in GTA are actually a lot more work than I want to put into them, popping in a movie like Ronin is easier.

This is sort-of the cinematic equivalent of GTA, without the hookers. There are mini-missions you must complete before reaching your ultimate goal, by any means necessary, regardless of the collateral damage. The only way police will come after you is if they just happen to be driving by while you’re engaged in a gunfight or smashing up cars (which is almost never). All you really need to worry about are the folks you’re chasing (or running from). But unlike my frustration with my dubious video-gaming skills, these folks never say "Aw, fuck it" and start wiping-out everybody within eyeshot. 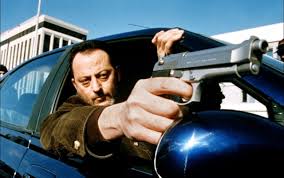 Road rage...some are simply better at it than others.


There are several gunfights, as well as two extended (very destructive) car chases. It was nice to see director John Frankenheimer, who helmed some of the best racing footage ever in Grand Prix, hadn’t lost his touch over the years. The seven minute chase through the streets of Paris is as good as anything in The French Connection, and it doesn’t look like Frankenheimer relied on special effects to get it done. We don't get too many classic car chases like these anymore. Today, most look like they're created through CGI or hyper-editing, with vehicles as indestructible as the Batmobile.

Another thing which makes Ronin interesting is how Frankenheimer chooses to show us the consequences of the mayhem caused by these characters. A lot of innocent people get shot in the crossfire during gunfights, or barbecued in their vehicles because they chose the wrong road on which to commute that day. However, Frankenheimer is careful not to show the film’s “heroes” directly causing any of these deaths.

It’s clearly apparent that if you want to go on a killing spree, do it in France. Despite all the carnage inflicted in public streets, there’s never a cop to be found, kind-of like Grand Theft Auto when you activate a cheat code which erases your wanted level (which I must admit I use sometimes). Or maybe the French police in Ronin are as corrupt as the cops in Liberty City...if caught, just pay them off and you’re back on the streets, even though you just destroyed half the vehicles in Paris and killed two dozen people.

Ronin's tight pacing, simple story and great acting also helps us overlook lapses in plausibility, such as when two Irish terrorists (Natascha McElhone & Jonathan Pryce) drive their car off a bridge during a chase in Paris. Despite the fact they are pulled from the wreckage barely able to crawl, they appear later on seemingly no worse for wear.

But even though I've never met anyone who didn't like it, Ronin seems to be one of those overlooked and forgotten films. I would think the virtuosity displayed in the chase scenes alone would have people ranking it right up there with Bullitt, The French Connection and Mad Max. The movie definitely has a similar 70's vibe - an era when action didn't always go hand-in-hand with spectacle. If it had been made back then, perhaps people would see it as one of the great action classics.

As for Frankenheimer, who made some unquestionably great films (Birdman of Alcatraz, The Manchurian Candidate, Seven Days in May, Seconds, Grand Prix, Black Sunday) before wallowing in mediocrity for a few decades, Ronin was a return-to-form. In my humble opinion, this ranks right up there with his best.

And for those of you who feel you're above - or can't admit you enjoy - the guilty pleasures of Grand Theft Auto, a movie like Ronin provides many of the same thrills in the guise of a grown-up action movie.
Posted by D.M. Anderson at 6:44 PM