ICE AGE: CONTINENTAL DRIFT and a Preoccupation With Death 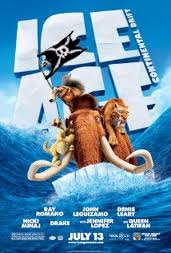 A few years ago I became deathly ill. It started off with what I thought was the flu, but without getting into unpleasant specifics, I ended up with life-threatening heart & lung issues which required a few surgeries. I was twice-put into an induced coma and spent almost three months in the hospital, during which time the odds of my survival sometimes dropped dangerously low.

Lengthy hospital stays really suck, and not just because you are sick. When you spend weeks with absolutely nothing to do but lay in bed, it fucks up your sleep patterns. I often found myself awake at 4:00 AM flipping from one infomercial to another, discovering just how bad some cable services are compared to my Direct TV subscription. During one particularly depressing night, when the prospects of my survival were still iffy, the best thing on TV was a show featuring dumbasses injuring themselves on camera, accompanied by "humorous" commentary by celebrities whose 15 minutes of fame ended during the Clinton Administration. That's when something horrible first occurred to me...what if this stupid fucking show is the last thing I ever watch?

My family came to the rescue. My oldest daughter, Natalie, offered me her laptop so I could watch movies (a huge sacrifice, considering her laptop is her world), and Francie (my wife) brought discs from home in order to pass the time. Because the prospect of death was foremost on my mind, I requested stuff that I always loved, just in case my heart did suddenly crap-out on me; I didn't want my last image to be of a guy crushing his own balls while attempting to skateboard off a roof.

So I watched a lot of old favorites...Jaws, The Great Escape, Pulp Fiction, The Towering Inferno, The Godfather, The Shawshank Redemption, Star Wars, etc. One exception was Alien. When you've got thirty staples in your chest, the last thing you wanna see is an Alien movie.

I've since physically recovered for the most part. Psychologically, not so much. I can't speak for everyone who has endured the same physical ordeal, but I now find myself thinking a lot more about my own mortality than I used to. Not that I'm obsessed, but I no longer look at death as some intangible thing to deal with when I'm good & ready. Every time I feel a slight painful sting in my chest, I briefly wonder if this is the beginning of the end, and if what I'm doing right that second is the last thing I'll ever do.

Chances are my death won't come at the perfect moment - right after a case of Moosehead and three helpings of my mom's lasagna, followed by sex with my wife while riding the Tower of Terror at Disneyland. No, I'll probably be at work and unceremoniously drop like a sack of meat in the middle of my classroom; some of my students will gasp, some might cry, some will whip out their phones to get pictures, and I can think of a few who'd probably poke me with rulers just to see if I'd twitch.

Recently, my family and I headed to my mother-in-law's for the weekend, but since it was a three hour drive and I was having one of my achy-chest days, Francie graciously offered to drive. So while she and Natalie sat up front, I climbed into the backseat with Lucy, which wasn't so bad because our SUV is roughly the size of the space shuttle, so there's lots of room. There's also a DVD player in back to pass the time, and Lucy wanted to watch the disc she just got for Christmas, Ice Age: Continental Drift. That was okay with me. We took Natalie to see the original Ice Age, which was better than I thought it would be. Even Ice Age 2 was a pretty decent sequel. As for Ice Age: Dawn of the Dinosaurs...well, sometimes parents are required to make sacrifices for the sake of the children.

I'm glad we were able to avoid taking Lucy to see Continental Drift in theaters. The trailers made this fourth film look like a cynical cash-grab, concerned with appealing to undemanding kids with 3-D and a growing cast of celebrity voices. But as me and Lucy slapped on our headphones and hit the play button, I figured it would at-least be an entertaining enough way to kill time in the back seat of our shuttle. 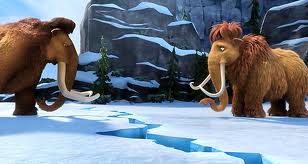 A metaphor for marriage.

I figured wrong, because Ice Age: Continental Drift is a godawful shitfest created to vacuum the wallets of parents who can't say no to their kids. The animation is as good as usual (a notch or two below Pixar standards), but the story is clumsily cobbled together and many of the characters who were once endearing have worn out their welcome (like Sid, voiced by John Leguizamo, who was borderline-obnoxious in the first film...now I wish Diego had eaten him a long time ago). The new characters introduced in this one are even worse. Even Scrat, the hapless acorn-obsessed squirrel who was the best part of the previous films, has become boring...just the same recycled gags over and over. Staring out the window at passing trees would have been preferable.

About a half-hour into it, my chest started hurting quite a bit. It happens on occasion, but I don't usually share this with my family, mainly because I don't want to worry them, so I suffer in silence. It eventually subsided (just gas), but got my morbid brain working again as the movie played on. I forced myself to keep watching for Lucy's sake, but all the while, a horrid thought kept running through my mind: What if Ice Age: Continental Drift ends up being the last movie I ever see? What if the last voice I hear before traveling to the hereafter is a spittle-dripping sloth? That would be an awful way for a lifelong movie lover to leave this world.

Sitting in that back seat, powerless to do anything about it (Lucy was enjoying the movie immensely), I silently begged my heart to keep plugging away long enough get back home and catch The Godfather one last time. I've never demanded a lot out of life, so I didn't think it was asking much that my last movie experience on Earth be something besides Ice Age: Continental Drift.

After the movie, Lucy removed her headphones and declared, "That was awesome!" All I managed to say was, "I'm glad you liked it, honey."

On the plus side, I got to hang out in the back seat with my kid (I so-enjoy watching & hearing her laugh), and the money we spent on the DVD was a hell of a lot cheaper than wasting fifty bucks to see it in a theater (a sad state of the movie-going experience, which I'll get into another time). So after the trip was over and my chest pains had subsided, I decided that if I was to die of a heart attack in the back seat of our shuttle, at least I was with one of my kids, not in the middle of my classroom.

Having survived the Continental Drift ordeal, I'm now thinking maybe I should be less concerned about what will be the last movie I ever see, but who I'm seeing it with.
Posted by D.M. Anderson at 4:03 PM