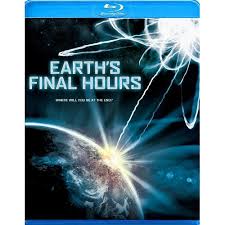 Anchor Bay Entertainment
There are two things one needs to know about Earth's Final Hours in order to get any enjoyment out of it. First, this is yet-another apocalyptic disaster story that the SyFy Channel unleashes on a nearly weekly basis, meaning the special effects were likely created on some guy's laptop over a weekend. Second, these effects are few and far between, and despite the promise of massive destruction depicted on the box art, the closest we get to real onscreen mayhem is when a girl’s decades-old sedan blows up..

So what's left is the story itself, which is somewhat ludicrous...a piece of matter from a white hole boars straight through the Earth, causing the magnetic fields to dissipate as the planet's rotation begins to stop. This is a bad thing. Earth is screwed unless there's some way to restart its rotation. Fortunately, there are a couple of scientist who developed a satellite system to counter this sort of thing. But unfortunately, our evil government (headed by a douchebag who inexplicably refuses to try anything which might save the entire planet as opposed to a chosen few) mothballed the project years ago after said-scientists refused to turn their invention into a weapon. Now it’s up to a renegade CIA agent, his computer-hacking son and an astronomy expert with a great rack to save the world.

Effects-wise, this is low-rent stuff, which leaves the aforementioned story. It has its moments, including a lot of pseudo-science which makes one briefly think such a scenario is plausible...at least until we end up in an abandoned mining town where an obnoxious teen punk, using 20-year-old computer equipment, is capable of undermining state-of-the-art government-issued technology simply because he’s a rebellious hacker.

If you keep your expectations really, really low, Earth’s Final Hours might be decent enough time killer, but it’s hardly worth owning until it inevitably turns up in Best Buy budget bins in the near future.