THE PLAGUE DOGS: The Feel-Bad Movie Of All Time 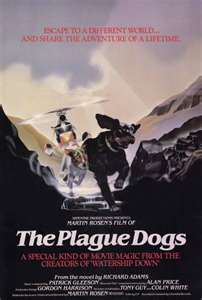 Hands down, the most relentlessly depressing movie of all time is The Plague Dogs. Go ahead, offer Schindler’s List, Sophie’s Choice, The Road, Seven or anything directed by Abel Ferrera as rebuttal. If you do, you have either not seen The Plague Dogs or you truly believe that animals are as godless as the Graboids in Tremors. If you are one of the latter, I don't want to know you, but I’m more inclined to believe you are one of the former. Who doesn't love animals? How often we watch films where countless people die, yet if even a single animal is in peril, we think, "No, not the dog!"

The Plague Dogs is a movie where nearly every cruel, violent or horrifying event is inflicted on man's best friend.

Aside from my wife, to whom I subjected this movie when I found it on the shelf of a now-extinct mom-and-pop video store, I’ve still never met anyone who had even heard of The Plague Dogs, even though it is based on a novel by Richard Adams, renowned for penning the bestselling classic, Watership Down. That book was later adapted for the screen by director Martin Rosen.

I tried reading Watership Down as a kid but couldn’t get through it, mainly because Adams expected the reader to keep referring to a glossary at the end of the book to understand the terms used by his rabbit characters (any book which requires you to educate yourself before enjoying the story isn’t worth reading). But the tale itself was intriguing enough to spawn a pretty great animated movie in 1978. This wasn’t your normal Disney cartoon fare. Watership Down is very British and very violent, the first cartoon I ever saw where blood is visually split and characters die onscreen, sometimes horribly.

As a kid whose cinematic tastes had graduated beyond G-rated Disney fare, the idea of an ‘adult’ cartoon had a lot of appeal. Hence, I loved Watership Down, which is still considered by many to be one of the greatest non-Disney, traditionally-animated movies of all time. Today, as a teacher instructing seventh grade students in persuasive writing - when I require them to view and write a review of a film - I occasionally truck out my copy of Watership Down. Even in this age of gory Japanese anime (or in the case of Sailor Moon, pedophile training ground), I still hear kids occasionally blurt out, “Holy crap, that bunny rabbit just got killed!”

Some of my students like the violence, others are shocked. The main problem most of them have with Watership Down is, in the filmmakers’ strive from realism, it is difficult telling the rabbits characters apart because they all look the same (a totally legitimate argument). And absolutely none of them knew why a film with such a title had no actual ships in it. Neither did I for the longest time. I had to look it up (it is the name of the grassy hill the rabbits discover in their quest for a new home, a place which actually exists in England). But even though Watership Down is a dark film, it is ultimately a life-affirming tale of selflessness, bravery and faith.

Not so with The Plague Dogs, which is easily the most nihilistic, brutal and bleak movie I have ever endured. Like Watership Down, it is animated and the fact it was made by the same director was the main reason I picked it up at the video store. But aside from the style of animation and British voices, the similarities end there. Unlike the somewhat-anonymous rabbits in Watership Down, we immediately form an attachment to the animal characters in The Plague Dogs, making subsequent events in the film so obscene.

The plot centers around two hapless pooches, Rowf and Snitter, trapped in a research facility which conducts cruel experiments on animals. Snitter is sort-of nuts, suffering the effects of experimental brain surgery. Rowf is repeatedly subjected to tests where researchers document how long he’ll struggle to survive by treading water before giving up and drowning, then they fish him out so they can repeat the experiment again the next day. This is all in the first five minutes of the film. It only gets worse from there. Rowf and Snitter manage to escape the facility, only to be relentlessly hunted by the local community and the military due to a falsified press release that the two dogs are carrying a lethal plague.

Through heart-breaking flashbacks, we learn Snitter was once a loyal pooch loved by his master. Later, while the two dogs are on-the-run, Snitter comes across the lone sympathetic human character in the movie, who is hunting in the woods. With the hope of finding a new master, Snitter is excited and hopeful, only to have this promising meet-&-greet end tragically when the dog’s paw hooks the trigger of the rifle, blowing the man's face off. Rowf, on the other hand, has no illusions and doesn't trust humans, having never experienced bonding with a master. Along the way, the two dogs befriend Tod, a sly fox who ends up being killed while trying to help. During all this time, both dogs are becoming visibly thinner from hunger and are later forced to eat one of the very people hunting them in order to survive.

At the end, surrounded by military guns and helicopters, Snitter and Rowf reach the coast. With no choice, they try to escape to the ocean and swim toward what they think is an island, when in reality  is just the setting sun. The film ends with the exhausted dogs, long past the point of no return, about to drown, yet still believing they’re going to find safety.

That’s it. And remember, this movie is a cartoon, and even though it is rated PG-13, I found it in the kids’ section of the aforementioned video store. What makes the movie even more of an ordeal is that the two main characters aren’t singing Disney dogs with sparky personalities reflective of the celebrities who voice them. They behave, think and speak the way we imagine real dogs would, unable to comprehend why all this is happening, yet remaining hopelessly optimistic that there is a human out there somewhere who will love them. This makes their ultimate fate as hard to watch as movies get.

The Plague Dogs is extremely well made; the animation and voice characterizations are as good as, if not better than, Watership Down. But it is also so dark, disturbing, relentlessly oppressive and so contemptuous of humankind that it makes Watership Down look like The Emperor’s New Groove (if you consider yourself a ‘dog person’ it will fuck you up for life). And this tone is set so early that the viewer is pretty damn certain within a few minutes that this is one movie where things are going to end badly. I have never seen a movie where more craft and care was taken in making sure its audience feels like total shit afterwards.

Yet whenever you come across various critic or fan lists of the most disturbing movies of all time, The Plague Dogs is almost never included. Is it because the film is animated, the atrocities presented are inflicted on dogs or that the movie simply hasn’t been widely seen? Whatever the case, the film is as painful to sit through as Schindler’s List, and although I admire it, I don’t think I could ever sit through it again, especially now that I own a dog.
Posted by D.M. Anderson at 5:01 PM