THE BLUES BROTHERS: The Guys' Musical 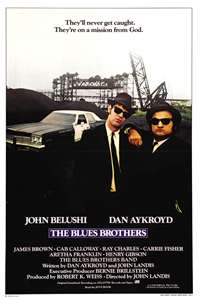 When I was a kid, I had this buddy named Matt Schuler, whose dad was the first in the neighborhood to buy a VCR (or VTR, as they were called back in the day), a mammoth box roughly the size of a Chevy Nova, which played Betamax tapes. I think his dad bought it primarily to record football and watch porn, but I was in awe because this giant machine was every movie lover’s dream...the ability to watch a real movie in the privacy of your own home, without waiting for it to come on HBO or for NBC to edit the shit out it two years after it showed in theaters.

One of those early videos was 1980's The Blues Brothers. I had seen it before. The Blues Brothers was a already a milestone in my young life because it was the first movie I invited a girl to on an actual date, where I picked her up and paid for everything. Her name was Molly, a cute girl I was friends with in high school. We went to the Foster Road Drive-In to catch the flick. Of course, the Foster isn't there anymore, long-ago replaced by an industrial park.

Back then, taking a date to a drive-in mostly meant one thing, and it wasn’t to watch the movie. But because my movie-geekness still outweighed my teenage urges, we actually sat in my car together and watched the movie, an act probably not expected from a teenaged kid with a girl seated next to him.

Hey, what can I say? Yeah, girls are awesome, but so are movies, especially when you have to pay for them with your meager allowance.

Anyway, after the show was over, I drove her home, we kissed goodnight and that was it. We never went out again afterwards, even though the date was great (at least I thought so) and we remained friends. I'm not sure why I never asked her out again. Maybe it was because the next girl I asked out definitely knew the purpose of drive-in dating, and didn't give a damn what was on-screen. After about five minutes with her, I didn't give a damn, either.

Anyway, a year or so after that date with Molly, The Blue Brothers was one of the first-ever movies available to rent and take home. In case you haven't seen it, the film is a musical comedy based on a recurring sketch from Saturday Night Live, back when that show was still funny. John Belushi and Dan Ackroyd play Jake and Elwood Blues, two seedy musicians trying to save an orphanage from foreclosure by getting their band back together and doing a show. The thin plot is mostly an excuse to feature a lot of deadpan comedy, several musical numbers and, best of all, a shitload of car chases and vehicular mayhem.

Not to let my inner sexist show, but I'm a guy, and even though I have an appreciation for many classic musicals, I must grudgingly admit I think movie musicals are mostly a chick thing. As much as I can acknowledge the artistry and elegance of a film like The King and I, I really don't feel the urge to sit through it a second time. Yeah, I know it made Yul Brynner a star, but I grew up watching him blow away tourists in Westworld, blasting banditos in The Magnificent Seven and being all-around badass in The Ten Commandments. I've seen each of those movies at least ten times each. I've watched The King and I once.

That's how I'm wired. Hell, that's how most guys are wired. And as guys, we can't help-but-think how much more awesome The Sound of Music would have been if the Von Trapp family strapped on some Uzis and commenced cutting Nazis in half between musical numbers.

But The Blues Brothers? That is, without a doubt, the first-ever musical truly made for guys. The 1969 musical-western, Paint Your Wagon, where we are subjected to the horror of Clint Eastwood's vocal abilities, doesn't really count. That overblown cinema suppository was simply another corny old musical which happened to feature two woefully-miscast Hollywood tough guys (the other being Lee Marvin, who turned down the fucking Wild Bunch to do this). Pink Floyd The Wall doesn't count either. Yeah, we all loved Pink Floyd back then, but The Wall is notsomuch a movie as it is a 95 minute music video, and only interesting after you've addled yourself with enough LSD to declare Bob Geldolf a good actor.

What makes The Blues Brothers the first (and perhaps only) truly guys' musical is the fact that it is mostly rambling, shapeless and often-nonsensical, a hodge-podge of everything endearing to guys with the exception of gratuitous nudity. It has little more actual plot than The Road Warrior (surely the simplest story of all time). Sure, there are several musical set-pieces as expertly choreographed as anything in Singin' in the Rain, but for the most part, they do not serve the story in any way whatsoever, despite how great the songs are (especially when Arethra Franklin shows up to belt out the best number in the film). They pop-up almost randomly, as do the car crashes, guns, flamethrower attacks, building bombings, shopping mall destructions, Nazis, Orange Whips and gratuitous cameos by various actors, musicians, models & film directors.

Regarding Video East, which had a promotion going at the time Matt plucked it off the shelf...if you could accurately count the number of cars destroyed in the movie, you’d win 10 free rentals! That didn't seem to difficult...challence accepted! Once we got back to his house and shotgunned a few brews, we watched it closely, trying to keep track of all the vehicular carnage. It was easy at first, but became increasingly difficult as the movie progressed, especially during the last thirty minutes, during which time we just gave up (if you've ever seen the film, you know why). The vehicular attrition in The Blues Brothers must be seen to be believed. To this day, I am convinced tallying the automobile carnage in The Blues Brothers is an impossible task to all but the most dedicated movie geek, even with the ability to freeze a frame, but I had a sneaking suspicion that not even the proprietors of Video East knew the exact count.
By the way, according to IMDB, the number is 103, a record at the time, eventually broken by the sequel, Blues Brothers 2000.
Posted by D.M. Anderson at 4:53 PM