THE SWARM: Not A Film To Watch When Chemically-Altered 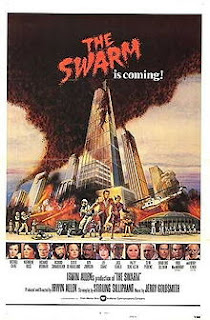 A long time ago, in a galaxy far, far away, drugs were still cool. I knew a guy named Scott, who spent most of his high school years in a pot-induced haze. He was the typical likeable stoner present in every high school, mainly because he had an endless supply of weed he was willing to share with anyone in the room at the time he decided to load a bowl. Hence, I hung out with him a lot.

Scott was also a closet scientist, a trait which only came to the surface when he was high. He wouldn’t do jack-shit in biology class, but was more-than-willing to conduct experiments with the able assistance of Panama Red. Baking in his garage one night while his parents were out of town (which was often), me and a few buddies listened to Scott’s theory about digestion. He put-forth that corn showed up in shit because it wasn't chewed up enough, so it stood to reason that if you swallowed a sardine whole, you’d have a turd sprouting fins in the toilet bowl a few hours later. We never discovered if his hypothesis was true - though we did manage to get him to swallow a whole sardine without killing himself - because, like most people in our condition, the overwhelming urge to crash in front of the TV while passing around a box of Apple Jacks outweighed the need to carry on in the name of science.

Nobody had cable back then, although HBO was becoming available to those willing to stick a dildo-shaped antenna on their roof. Scott’s parents weren’t among that group, so the only thing this night on TV was The Swarm, Irwin Allen’s 1978 killer bee epic. I saw the movie when it first came out, and even then I knew this was one of the movies which would essentially kill the disaster movie craze in the 70s. But it plays a lot better when you’re high. When you’re high, the lousy special effects take on a surreal look, and there are plenty of dull stretches in-between the attack scenes to run into the garage and fire up another bowl. There’s also the tendency to seriously ponder whether or not a swarm of bees could actually cause a train to derail or a nuclear power plant to explode. Sober folks wouldn’t engage in such a debate. They know better.

Though we had abandoned the sardine experiment, we did manage to come up with a few other conclusions, even if the Scientific Method was no longer foremost on our minds. One thing we discovered was that Michael Caine (and his goofy hair, one of God’s crueller jokes) isn’t someone you should watch when you’re chemically imbalanced. His performance in The Swarm, with his weird gaze & deadly-serious delivery of dialogue that makes a Godzilla movie sound like the prose of Tennessee Williams, had me convinced he was trying to mess with my head. And when he pulled out his trusty pouch of sunflower seeds, it had Rick (one of the other guys hanging out that night) wanting to head to 7-Eleven to grab a bag of his own. Fortunately, he couldn’t find his car keys.

We also discovered Scott was willing to fuck anyone...even Olivia De Havilland, who in The Swarm plays an elderly school principal in being courted by geezers Ben Johnson and Fred MacMurray. Yeech.

“What?” replied Jeff, another guy in our cannibus crew in between handfuls of dry Apple Jacks. “She’s a thousand years old and 300 pounds! I suppose you’d do that military dude, too.”

“Richard Widmark,” I interjected, being the only movie geek in the bunch.

Scott ignored my clarification of the film’s cast and said to Jeff, “Yeah, but dude, if she was the only chick around and the lights were off and...she's got a nice mouth and everything...” (It was at this point I realized career stoners probably would fuck anything). Then he looked at me. “Dave, you’d do her if there was no one else around, wouldn’t ya?”

“Maybe if she was the Gone with the Wind Olivia De Havilland,” I replied.

“Gone with the Wind? That’s my grandma’s favorite movie!” Scott started laughing uncontrollably, apparently enjoying the punchline to a joke only he understood. At this point in the film, the killer bees caused a train carrying much of the cast - including Olivia - to tumble down a mountain in a fiery blaze, thus ending the debate whether or not she was fuckable. Besides...it was time to go back out to Scott’s garage to refuel during the commercial break. 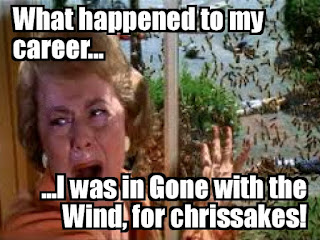 Speaking of Olivia De Havilland, her role in the The Swarm has absolutely no impact on the plot at all. She’s introduced in a few pointless scenes before plummeting to her death.. You could take out every frame she appears in and she wouldn’t be missed at all. You could say that about half of this ‘all-star’ cast...Slim Pickens, Lee Grant, Richard Chamberlain, Patti Duke (in a hilariously random scene of blooming love for her physician, even though her husband just died!), Jose Ferrer, Ben Johnson, Fred MacMurray...all included for no other reason than to boost The Swarm’s marquee value. Hell, it worked for Allen’s The Towering Inferno. Surely it’d work again, right?

But the difference is, despite its cornball melodrama, The Towering Inferno is actually a good movie, mainly because Irwin Allen only directed the action scenes. He left the ones involving real actors to John Guillermin. In addition, even though a large portion of the cast popped-up in little-more than glorified cameos, we cared about their characters enough so that when one died horribly, at least the audience felt something. Not so with The Swarm, the first of Irwin Allen’s disaster films where he handled all directorial chores. This is when we realized that this ‘Master of Disaster’, as he was fondly called when the genre was at its peak, really had no inherent filmmaking talent of his own. The gratuitous cameos are often so random and out-of-place that (along with the worst dialogue ever uttered in a big-budget film) you can’t help but laugh. Seeing it today, once you throw in the shoddy special effects, you have one of the most unintentionally funny films of all time. Imagine if Ed Wood (Plan 9 from Outer Space) was given an unlimited budget, access to major Hollywood stars, and a script written by a community college creative writing class, all working on individual scenes without knowing what the other writers are doing. Put all that together and you end up with The Swarm.

And it’s for all those reasons that The Swarm is so damned fun. It’s one of those rare birds...a film with a gigantic budget and a huge cast, squandered by a hack once revered for creating a genre, only to destroy that genre (and his reputation) by believing all the media hype the bestowed him. And The Swarm was definitely the biggest nail in the disaster movie coffin. For one film to single-handedly destroy a genre, it must be worth seeing. As such, The Swarm does not disappoint.

A few years later, Airplane! was released, exploiting every disaster movie cliche for laughs and making sure the genre stayed dead for the next two decades. But now that both Airplane! and The Swarm are thirty-year-old relics, try watching the two of them back-to-back today. Both are still hilarious, but for different reasons. Airplane! is still funny, but because it knowingly parodies a genre popular of the time, many of its most hilarious moments may be lost on modern audiences. But The Swarm, by virtue of its sheer awfulness, is even funnier. One only has to see Richard Widmark’s performance to appreciate that. Here’s a guy whose been a reliable co-star his entire career, applying the same earnestness to this role, only stuck being the dumbest character in the film. As General Slater, he repeatedly suspects the motives of Bradford Crane (Michael Caine), who has done nothing but help resolve the killer bee situation, yet Slater still orders his second-in-command (Bradford Dillman) to ‘build up a dossier’ on the scientist. To what end? Does Slater really think Crane is in league with the bees? It’s to Widmark’s credit that he approaches the role with the same seriousness he once did for Kiss of Death.

It’s also to Caine’s credit that, even though he sometimes looks like he knows this was the worst film he’d ever signed on for (at the time), he never offers a knowing wink over the ridiculousness of the story, nor does he look like he’s about to lose his lunch with the next stupid line he’s forced to utter. I can’t begin to imagine the gorge he made himself swallow when doing Jaws: The Revenge.

On an awesome footnote, though, The Swarm offers something no other disaster film did at the time. You know the perky/smart-aleck/adorable kid who pops up in every one of these movies, the one you wished would die but never does? Well, in The Swarm, that kid dies. It's supposed to be a tragic moment (swelling music, crying doctor at his death bed), until you remember that this little bastard was also responsible for several hundred deaths because he just had to taunt the bees.

Simply put, The Swarm may be the greatest bad movie of all time...more fun than a barrel of Twilights.

I bought The Swarm when it came out on DVD, and have enjoyed it more than any of Irwin Allen’s other films. Allen himself died in 1991, and no, I wasn’t invited to the funeral, so I imagine the eulogy covered only his greatest successes (The Poseidon Adventure, The Towering Inferno, Allen’s various TV shows in the 60s). Too bad, because, as much as I love Poseidon and Inferno, they aren’t as much dumbass fun as The Swarm.

Regarding the night me and my buddies baked ourselves in front of the TV back then, I eventually lost touch with Scott. Like a lot of stoner friends we may recall fondly, he’s got no Facebook page, nor have I seen him at any reunions. I dunno, maybe he’s still in front of his TV, lusting after Olivia De Havilland. I only hope he’s a little more sober, and being so, perhaps checked out some of De Havilland’s older movies, when she was certainly younger and hotter than she was in The Swarm.
Posted by D.M. Anderson at 2:52 PM