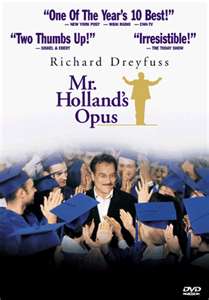 I first saw this movie in the middle of trying to earn my teaching degree, so it did not inspire me to actually become an educator. It undoubtedly inspired others. Mr. Holland’s Opus is a pretty damned inspirational movie, and a refreshing (for the 90s) look at a teacher who is not some nube who takes a job in an urban hellhole to single-handedly turn a herd of gang-bangers into scholars. One thing the movie does do is make teaching look like a noble and ultimately rewarding profession.

Noble? I don’t know. After all, despite Hollywood’s historically romantic image of the teaching profession, it is still just a job. Most teachers I know look forward to summer breaks more than their students. Rewarding? Sometimes. There are occasional moments when you know you've done something to steer a kid's life in the right direction.

The job is sometimes pretty interesting, too. I teach seventh graders, who are an odd lot; half of them still play with Legos, the other half are already getting their freak on at school dances, dry-humping each other on the dance floor before one of us has to turn the hose on them. In fact, whenever I tell someone what grade I teach, I often get looks of sympathy.


Like any job, there are downsides. There’s the usual stuff you hear in the news, like budget problems, class sizes, violence, teachers as scapegoats for all the problems in schools. There are also a hell of a lot of people in the community who haven’t set foot in a classroom since they graduated, but think they know a lot more about your job than you do.

I’m also amazed every year at the number of parents who, even though their kids have been disrespectful bastards and failed every class for years, are convinced their child’s teachers are collectively conspiring against him. Then there are the parents who haven’t given a damn about their kid’s behavior or academic performance all year, but are the first to scream bloody murder when a teacher says or does something they don’t like. A few years ago I caught a boy hugging a female student in the hall (which is not allowed where I teach), and he got pissed off at me for catching him. He’d already been written up several times previously for the same infraction, but he accused me of   singling him out and got pretty damn disrespectful. This pissed me off because I’d always gotten along with the kid until then, and even let some of his behavior slide on occasion. When I took him aside, I berated him for his disrespect, saying I had cut him a “shitload of slack” in the past. Yes, the word shit slipped out; teachers aren’t perfect, but they are expected to be. Anyway, I wrote him up for his infraction, and not even two hours later I got a call from his mother, who was angry as hell that I swore. Never mind that the kid had been failing every class, all year, and had been written at least a dozen referrals for his behavior. The only time she called to express any concern was when her boy heard an expletive.

Then there was the time another male student wanted to use the restroom on a day a substitute teacher was filling in for me, but the kid had already used all of his passes. The sub followed procedure and refused…no pass, no exit from the class. The kid got defiant, then walked over to the trash can and pretended to piss in it, which apparently got a lot of laughs from the rest of the class. This kid also had a history of behavior problems and was not what you’d call an academic all-star. Still, he sometimes tried hard enough that I once bumped his D to a C so he could stay on the football team. When I returned to class the day after the incident, I wrote him up for his inappropriate behavior and had him call home. He got a hold of his mother and proceeded to blame me for not letting him use the bathroom (even though I wasn’t there and only reacting to the sub’s report). He conveniently left out the trashcan portion, and when she demanded to speak to me, she began with, “Listen, motherfucker…” before accusing me of picking on her son (even though I was the one responsible for keeping him on the football team). When I explained he was being written up for pretending to piss in a trashcan, she replied, “Well, did he actually do it?” When I replied no, she went off on me again. I guess it’s okay to pretend to piss in a trashcan as long as you don’t actually whip it out. Yeah, try that at your job and see how long you stay employed.

It’s stuff like that they do not prepare you for in college. Nor is it kind of stuff depicted in movies about teachers. Most movies featuring teachers fall under the following categories:

Mr. Holland's Opus falls under that last category. Richard Dreyfuss plays the title character, a musician with dreams of being a successful composer, but is forced to support his family by becoming a music teacher at an Oregon high school. He considers himself a musician, not an educator, and hates the daily grind of teaching and all that entails (troubled students, dealing with administrators, the conflict his job has with his ultimate goals). The film covers roughly 30 years of his career, and the whole time he’s thinking he’s been a failure, until he’s ultimately forced into retirement due to budget cuts. By now, teaching is all he wants to do. The film climaxes with a high school assembly, where dozens of former students show up to give tribute by performing the magnum opus he’d been working on for decades. Only then does Holland realize that his true calling wasn’t writing music; it was touching the lives of so many of his students, almost all of whom became successful adults.

As a real teacher, I can safely say this film has almost no baring on real life. After 15 years as an educator, I’ve known dozens of teachers who have taught as long as Holland, and none of them were ever forced into retirement. They may have enjoyed their jobs, but most have willingly stepped down in order to enjoy their sunset years, free from the endless burden, responsibility and constant scrutiny. In reality, teachers are just like everyone else in the workplace, doing their jobs as best they can before finally reaching that point in life when they happily leave it to someone else (perhaps some young rube romantically inspired by movies like Mr. Holland’s Opus)

I guess that makes Mr. Holland's Opus kind of like teacher-porn.

Movies are not supposed to be real; they are supposed to be entertainment. Does anyone really watch Lethal Weapon  for a realistic depiction of police work? Hell, no, because if Lethal Weapon truly reflected reality, we'd be sitting through Internal Affairs hearings and psychological examinations of Martin Riggs, both conducted to get this psycho-with-a-badge off the streets. But I'll bet a lot of cops still liked Lethal Weapon, enjoying the fantasy depiction of their mundane jobs. For me, it is the same with Mr. Holland's Opus. I'm no Mr. Holland, but wouldn't it be cool if I was?

In fact, my only beef with the film is the influence it has had over the years…not on movies, but on real-life educators. This one has undoubtedly inspired people to become teachers the same way Top Gun encouraged guys to join the Navy (probably thinking they'd immediately be dropped into a fighter plane). I also think it’s also mostly responsible for turning a lot of teachers into pompous, narcissistic, self-righteous bores. Sit in any room filled with teachers - staff meeting, workshop, college class - and one will inevitably raise their hand to proudly share a Mr. Holland moment, when they enlighten you with some saintly thing they’ve done to change students’ lives. His or her face is beaming proudly while the rest of the teachers in the room bob their heads in approval, looking like a bunch of well-dressed pigeons but not really listening. Most are just waiting for this idiot to stop so they can waste more oxygen with their own Mr. Holland moment.

Trust me, as much as I love my job, there is nothing worse than being in a room full of teachers.  Most love to hear themselves talk, love to explain how dedicated they are to their profession, love to ‘piggyback’ on someone else’s comment in order to spout more pretentious crap. And a lot of it is crap. Some people discuss their educational efforts in such detail that it soon becomes obvious there are not enough hours in the day for them to accomplish what they claim. Of course, none of these soapbox-squatters has ever had a student who could be most-accurately described as little bastard or dumbass; those kids are simply misunderstood, troubled or challenged. And of course, none of these teachers have ever failed to turn a little bastard’s troubled kid’s life around.

Sit in a room with these people and you’ll walk away with the impression that all of them are 100% successful, 100% culturally sensitive, 100% empathetic and 100% incapable of anger towards students. Some of them even act like they'd even teach for free. Sure, some might, but most of us are human and leave our superhero cape at home when going to work. The bullshit meter climbs into the red pretty quickly whenever a bunch of teachers flock together.

One might argue that any inspirational movie about an educator could cause this, not just Mr. Holland’s Opus. But the difference is Holland isn’t some uber-teacher who saves a school, challenges authority for the sake of the kids or turns a class full of homies into valedictorians in a single semester. Holland is just an ordinary guy who learns to love his job over the course of 30 years, and touches some lives along the way. Even the self-serving teachers I’m forced to endure in meetings realize they are not Erin Gruwell or Jaime Escalante, but they can easily envision themselves as Mr. Holland. A lot of them probably think they already are.
Posted by D.M. Anderson at 4:31 PM