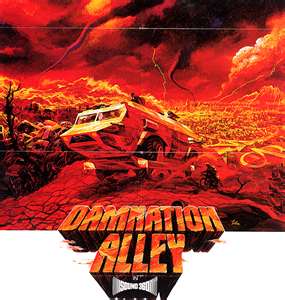 Starring George Peppard, Jan Michael Vincent and Jackie Earl Haley (you know, that creepy kid from Bad News Bears who went on to be nominated for an Oscar as a child molester, before becoming the new Freddy Krueger). Directed by Jack Smight. (1977, 95 min)

This movie has the dubious distinction of being the one I’ve seen in a theater more times than any other. Not because it’s any good, or that I’m a big fan of Jan Michael Vincent (who the hell is?), but because when I was a kid I hung out at a theater called the Southgate, a quad cinema with a pretty relaxed security policy. You could easily sneak from theater to theater and see all four movies for the price of one. Me and my friends thought we were pretty clever, but with hindsight, I doubt the theater management actually cared, so long as they were selling popcorn.

Just about everyone I knew went to the Southgate every weekend to bump into people of the opposite sex (okay, it wasn’t exactly Studio 54, but we were 13, and it was within biking distance). Back then, long before home video or digital downloading, movies played in theaters a lot longer than they generally do now. One of those movies was Damnation Alley.

Don’t remember this one? Damnation Alley, based on a novel by Roger Zalanzy, is a post-apocalyptic ‘epic’ that was supposed to be the bigger blockbuster of two sci-fi movies 20th Century Fox released in 1977 (the other one was Star Wars, which the bigwigs at Fox apparently had no faith in). And even though Damnation Alley had a much bigger budget than Star Wars, it turned out to be a truly cheesy end-of-the-world movie in which a few survivors of a nuclear war trek across the country in a weird looking, armed-to-the-nuts, multi-wheeled tank called the Landmaster. As dumb as the movie is, I gotta admit the Landmaster is a pretty badass vehicle, making the Humvee look like a SmartCar. It would sure come in handy today during my frequent bouts of road rage (get off your goddamn phone or I'll shove a rocket up your ass!). By the way, the original Landmaster built for the film still exists in storage somewhere.

Also of note is Sound 360, an audio gimmick ballyhooed in Damnation Alley trailers the same way Sensurround was for movies like Earthquake. Sound 360 was a multi-channel system which supposedly created an audio experience allowing the viewer to feel like they were in the middle of the action. Which is all fine and good, provided one wants to be in the middle of the action. Today, such gimmicks as Sensurround and Sound 360 can easily be replicated by any home theater system, but back then, I suspect they were used to convince moviegoers they just paid to watch a better movie than they really were. Kind of like 3-D today. Sorry folks, if you need any technical assistance to improve a movie, than said-movie wasn't any good to begin with.

Anyway, Damnation Alley played at the Southgate for about two months, and since our other choices at the time was stuff like The Goodbye Girl and Annie Hall (a fine film, but Woody Allen’s brand of humor is sort of lost on 13 year olds), me and my friends ended up watching Damnation Alley a lot. It was part of a double-bill with Wizards, a sleazy and stupid animated fantasy flick that once duped people into thinking director Ralph Bakshi had talent. On the plus side, that was the first cartoon I ever saw where the female characters had nipples.

Speaking of nipples, on about my fifth or sixth viewing on Damnation Alley, I bumped into a girl from my school named Shelly Joslin, who was there with one of her friends. Shelly had the honored distinction of having the biggest boobs in the 8th grade, which I actually got to touch in the back row of Southgate’s auditorium #2. While George Peppard and Jan Michael Vincent battled legions of killer cockroaches on the screen, I had my trembling hand up a girl’s shirt for the first time.

What does copping my first feel have to do with the movie? Not a damn thing, but whenever I fondly recall Damnation Alley, I don’t think of the ludicrous story, dumb pseudo-science or shoddy special effects that might have been impressive in 1960. I don’t think about the film’s characters being able travel across a radioactive wasteland without being covered in pus-oozing lesions. I don’t think about the ridiculous notion that the city of Albany survives unscathed, with white picket fences and green trees intact. I don’t think about Jackie Earl Haley, who played the young punk from The Bad News Bears and stretches himself here by playing another young punk. No, when I think of Damnation Alley, I still think of only one reason I still love it...Shelly Joslin’s boobs. Actually, that’s two things, isn’t it?
Posted by D.M. Anderson at 4:38 PM