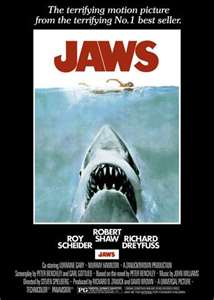 If you weren’t around in the summer of 1975, it’s hard to imagine the impact this movie had on everybody. Not just audiences, but society in general, including my mother. The first true summer blockbuster, Jaws scared the bejeezus out of damn near everybody, so much that many won’t even venture into the ocean to this day (including yours truly). I was 11 when it came out, and based on what my lucky friends who saw it had said, Jaws was numero uno on my gotta-see list.

My mom shot down my plans pretty swiftly. “You are not going to see that. My friend at work told me a dog gets eaten, and a dead man is floating in the water with no eyes.”

This was still a few years before questioning her authority was an option. I was heartbroken. There it was, the mother of all movies, the cinematic Holy Grail playing at the Southgate theater only five miles away, rendered forbidden fruit by my mother. Sure, I knew the whole story already, enthusiastically told to me by friends whose parents had no objections to letting them see it. But because it was rendered off limits, Jaws became the only movie I wanted to see. In ensuing months, I would occasionally ask Mom again, hoping she’d change her mind, but was always met with a stern no. She’d offer the same reason every time: “That’s not the kind of movie a kid should see.”

On rare occasions when I felt brave, I’d counter with, “But it’s rated PG. You’ve let me watch PG movies before, like Butch Cassidy and the Sundance Kid.”

“Butch Cassidy never devoured the Sundance Kid,” she said, probably proud of her response. “Jaws is a horror movie, and you’re not going to see a horror movie about a fish that eats people. It‘ll give you nightmares.”

It was at this time I’d usually sulk back to my room, not understanding her reasoning. I’d watched lots of horror movies before, but for some reason she had a problem with Jaws. And with my limited debating skills, I was unable to convey how much it meant to me to actually see a fish eat people.

It helps at this point to know a little about my mom. She’s a wonderful person and has always looked out for me, feeling the need most good parents do of protecting them from things in the world which could harm them. Yeah, as I got older, I sometimes felt like she was a bit overprotective and was sometimes bewildered at the pieces of pop culture she decided I wasn’t ready for. I bought an Alice Cooper album in the fifth grade and was listening to it one evening when she suddenly popped into my room, right when Alice was singing about keeping a dead woman in a refrigerator. Grabbing the lyrics sheet, Mom was aghast and instantly forbade me from buying any more Alice Cooper records. Funny thing is, I was just a kid and didn't care about the words and had no idea what the offending song (“Cold Ethyl”) was actually about. I just thought it sounded cool. The only reason I learned the subject of the song was because she pointed it out. This new knowledge ironically made the song even cooler.

Okay, as a parent myself, I can now understand her concern over what her son was listening to. So even though I thought Mom was being a bit overzealous, it was her right as a parent to express her concerns.

However, when I later got into a band called Emerson, Lake & Palmer, she and my dad eventually forbade me from buying their records simply because they personally hated the music. It had nothing to do with what they sang about. But again, since they were paying the bills and I was living under their roof, doing so was still their right (although, somewhat amusingly, as my musical tastes eventually turned to heavy metal, I distinctly remember, during a shopping trip when I planned on snapping up the latest Judas Priest album, Mom suggested, “Why don’t you buy an Emerson, Lake & Palmer record? You used to love them.”)

What Mom declared forbidden was actually pretty random. She decided I couldn’t see Phantasm because of the tagline, “If this one doesn’t scare you, you’re already dead,” yet she had no problem dropping me and two friends off to catch Dawn of the Dead, a movie so gory that it was released unrated, at a seedy little theater whose employees never checked IDs. Ironically, the movie playing with Dawn at the time was Phantasm.

Even more perplexing was her decision to forbid me from seeing The Gauntlet, a fairly minor (and stupid) movie in the Clint Eastwood canon, but simply something I had expressed an interest in watching. Yeah, that movie was rated R, but I’d seen rated R movies before, including Blazing Saddles, which they took me to (if you’ve never seen Blazing Saddles, let me tell you that the liberal use of the ‘N-word’ would shock modern audiences). Mom even had no problem with dropping me off at the Southgate to allow me to engage in the illegal act of theater hopping to watch all the movies playing at this four auditorium theater for the price of one ticket. For some unfathomable reason, sneaking into movies without paying was okay, but The Gauntlet was forbidden.

Anyway, back to Jaws. In November, on my 12th birthday, Mom suddenly decided it was okay for me to invite a couple of friends to see it. By this time, the film had been out for six months. Everyone else and their dog had already seen it, including my two friends, but that didn’t matter. After months of hype and hearing everything second-hand, I finally got to see this pop culture phenomenon for myself.

Jaws takes place in the fictional coastal town of Amity (in real life, Martha’s Vineyard), where a 25-foot great white shark starts attacking swimmers. In order to save this vacation town from financial ruin, sheriff Martin Brody (Roy Scheider), shark expert Matt Hooper (Richard Dreyfuss) and loony charter boat captain Quint (Robert Shaw) set out on a rickety fishing boat to kill the shark. That’s the movie in a nutshell, and while it doesn’t sound like much on paper, the story is so masterfully told that it rightfully made a superstar out of young director Steven Spielberg. We don’t even see the shark until about halfway through, which made it even scarier (it has been well-documented that the decision not to show the animal too much stemmed from the fact the mechanical shark broke down pretty often).

The final act (onboard the fishing boat) is still one of the most relentless and entertaining third acts ever made. And who really cares if you can’t actually blow up a three ton shark by shooting the scuba tank lodged in its mouth? It’s no more ridiculous than Jeff Goldblum destroying an entire alien civilization in Independence Day by firing up his laptop, and sure as hell a better ending than the one offered by original Jaws author Peter Benchley, where the shark simply rolls over and dies. By the way, if you never read the original novel, don’t bother. It sucks.

But why the hell am I summarizing the plot? Most of you probably got to see this before I did.

To this day, Jaws is one of the few movies that lived up to all the hype…and then some. We’ve all gotten amped-up to see uber-promoted blockbusters only to walk out of the theater thinking, “So what?” But Jaws was everything I hoped it would be: scary, funny, surprising. It was not the shocking gore-fest Mom feared - only five people are actually killed - and the poor little pooch she was so worried about doesn‘t die onscreen…in fact, it’s only implied that he dies. There is that jolting scene of one victim’s head popping at the screen with an eye missing, which scared me so bad my popcorn went flying, but Jaws was always more than just a “gotcha” horror movie. Leaving the theater, I felt like I saw just something special, more than just another flick my parents dropped me off to see while they went shopping. In ensuing years, not too many movies gave me that same rush. Star Wars, Raiders of the Lost Ark and Escape from New York (I’ll explain that last one another time) immediately come-to-mind, and the last movie to hit me with the impact of Jaws was Pulp Fiction.

But, just like my mom feared, the movie did give me nightmares. After coming home from the movie on my 12th birthday, some time during the night I crept into my parents’ room and crawled into bed with them. Man, that guy with his eyeball missing really did freak me out.

By the way...Jaws is still my favorite movie.
Posted by D.M. Anderson at 4:24 PM