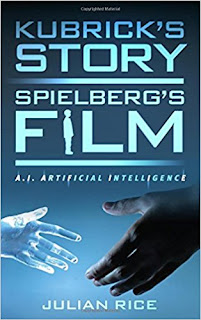 A.I.: Artificial Intelligence is one of Steven Spielberg's more polarizing films. Some declare it an underappreciated masterpiece, while others have criticized it for a variety of reasons. A chief complaint among the latter is Spielberg's treatment of the source material, which Stanley Kubrick had been trying to adapt for years. While he had the late director's blessing, many felt Spielberg's style was completely incompatible with Kubrick's darker sensibilities.

If there was ever a movie with a back-story worthy of a fascinating book, it's A.I. However, Julian Rice's book, Kubrick's Story, Spielberg's Film, is not a chronicle of the film's production. Instead, it's a deeply detailed analysis of each director's narrative and visual ideals, delving deep into both filmographies to pull out similar imagery and themes which may have ultimately shaped the film that was finally released (two years after Kubrick's death). The author's recurring argument is that the directors shared more common ground than their reputations suggest.

While A.I. is indeed analyzed in great detail - both narratively and aesthetically - other chapters look back to such work as Close Encounters, Dr. Strangelove, even the original novel of Pinocchio, in search of recurring themes like the apocalypse and parent/child relationships. Perhaps a but too analytical, at times, not to mention some really heavy, labyrinthine academic arguments that make this book a challenging read.

Not a book for the average movie fan - even if you happen to love A.I. - Kubrick's Story, Spieberg's Film is aimed more for at those whose appreciation of either director extends beyond their films' mere entertainment value.

NOT BAD...BUT PRETTY WEIGHTY READING
Posted by D.M. Anderson at 7:45 AM